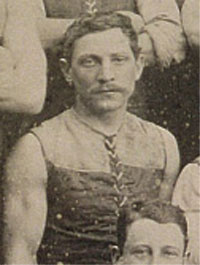 
NOT the Blue drafted in the 2020 National Draft, John/Jack Carroll was a follower and forward for the Blues over 2 seasons in the VFA.

1888 March 31
Carroll was named in the squad that played Port Melbourne on the M.C.G.
This was a benefit match to raise money for W. Bates, an English cricketer who was injured on tour. A crowd of 15,000 attended.

1888 May 5
Carroll named in 23 man squad for season opener against St.Kilda at St.Kilda.

1888 July 21
Carroll scored Carlton's only goal in the loss to Williamstown at Williamstown.

1888 Carroll mentioned in two games, but named in the squads for 12 other games this year.

1889 Carroll mentioned in 2 games and in squad for another 8 games.
He was a regular up until the Blues played a N.S.W. team at the M.C.G. on Wednesday July 17.
Carroll was named in the 28 man squad for this game, but he does not appear for the remainder of the season.