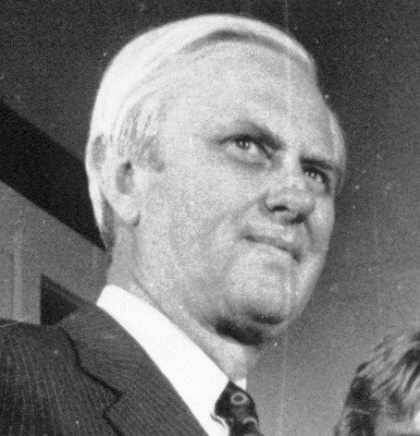 
The son of a Norwegian father and an English mother, Ivanhoe Borch Rohrt became the 22nd President of the Carlton Football Club in 1975 when he succeeded George Harris. A prominent hotelier in Carlton and a long-serving Melbourne City Councillor, Rohrt had been a member of Harris’s Reform Party since 1965, when the group swept to power and transformed the club by appointing Ron Barassi as captain-coach. Three Premierships later, Harris resigned to concentrate on his personal business affairs, and annointed Rohrt as his successor.

Born in the Gippsland town of Yarram in 1920, Rohrt moved to Carlton in 1940 when his parents took over the running of North Carlton’s iconic Rising Sun Hotel. “If you didn’t support Carlton then, your pub was no good - and that was how I became a Carlton supporter,” he later explained. By 1964 Rohrt had succeeded his father as manager of the Rising Sun, and was in his 15th term as a member of the Melbourne City Council, serving on three major committees including finance and public works.

In November of that year (Melbourne Cup Day to be precise) two strangers came to the hotel and approached Ivan, saying “Are you Councillor Rohrt?” When he replied that he was, and asked the nature of their business, the taller of the pair replied; “My name is George Harris, and this is Eddie Fakhry. You’re a city councillor – would you be interested in joining a reform group at Carlton? After a couple of days of thought, Rohrt rang Harris and accepted his invitation. “It was a very exciting time, because it opened up a new era for me, and of course a hotel keeper being involved in the main sport in the area was a good business move too,” he later recalled.

Within a matter of weeks of assuming office, Harris had convinced Barassi to leave Melbourne and set the Blues on a path to the 1968, 1970 and ’72 flags. Meanwhile, through his connections at the Melbourne Town Hall, Rohrt was instrumental in the planning, financing and building of the Carlton Social Club. When Harris resigned in 1975 to pursue his private business interests, Vice President Rohrt was his logical successor, both as Carlton President and a VFL Director.

However, Rohrt’s reign as President was somewhat rocky. On the eve of the 1976 season, John Nicholls resigned as the Blues’ captain-coach, and five days later Secretary Allen Cowie suffered a heart attack at his desk and died. That same year, Carlton secured record sponsorhip from American-based finance company Avco, but when the Blues faded to sixth in 1977 Rohrt agreed to step aside to allow Harris to return.

Afterwards, Ivan remained closely aligned to Carlton for the rest of his long life, which ended in early March 2016, just a fortnight shy of his 96th birthday. A few days later, Carlton players taking to the field for a televised pre-season match against Sydney wore black armbands in his honour.