Ian Harry played through the lower ranks of the Carlton Football Club, ascending to two seasons of Reserves Football through the 1960's. He made his journey to Carlton after being recruited from Tyntynder / Swan Hill / University High School and then the Carlton U/19's. Harry later played for VFA club Mordialloc.

Harry was named as ruck-rover in the 1978 Sydney All-Stars, at the end of the season he was selected in a Sydney All-Star Team, or putting it simply, a team of the year. He would play in the losing Grand Final that season representing Western Suburbs as they went down by 29 points to North Shore.

Years later, in a Blueseum interview, future Blue Greg Sharp attributed his 'spot' at Carlton to Harry. Ironically, both players would wear the No.29 guernsey. 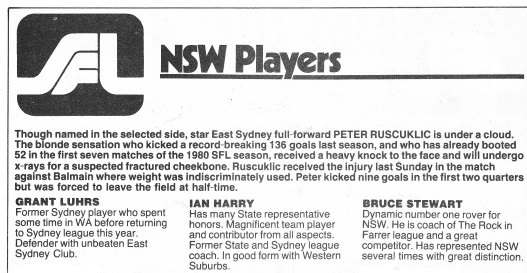