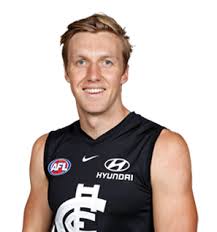 Carlton added to its tall defensive stocks with the acquisition of Hugh Goddard. The former Saint was selected by the Blues with pick No.1 in the NAB AFL Rookie Draft. A talented key defender, Goddard was one of the most highly-touted prospects in his draft year of 2014, where he was taken by St Kilda at pick No.21. While a string of injuries have limited Goddard to 10 senior AFL games, the big-bodied defender has shown he is capable of locking down on the opposition’s key forward. Throughout his underage years, he also showed an ability to play up forward while he’s reliable with his disposal. Returning from injury and gaining some continuity in his football, the final six weeks of 2018 saw Goddard average 19 disposals in the VFL and earn a senior recall in Round 22. Strong overhead and with a turn of speed, the 22-year-old will be looking to make the most of his second chance after training with Carlton to begin pre-season. GM of List Management and Strategy Stephen Silvagni said the Blues were excited by what Goddard could offer his new club. “Hugh will provide us with strong defensive depth and at 22 years of age will fit well into the backline group alongside co-captain Sam Docherty, Kade Simpson, Jacob Weitering, Caleb Marchbank, Liam Jones and Lachie Plowman," Silvagni said. “Hugh has potential and while he has had his share of injuries, we believe we can give him the support and the opportunity he needs to fulfil that potential in a navy blue jumper."

Hugh Goddard was rewarded for his consistency with the Northern Blues and promoted for the Blues clash with the Sydney Swans in their Round 17 clash at the SCG. Goddard would have his game finished early when he had an accidental hit to his jaw, but it wasn't all bad as the Blues registered a hard fought seven point win on his Carlton debut.

After the final round of the 2020 season, the Carlton Football Club informed four players that they will not have their contracts renewed for the 2021 season. Darcy Lang, Hugh Goddard, Ben Silvagni and Finbar O'Dwyer have been told that they will not be retained at the Club beyond 2020.

He played most of the season with Carlton's VFL-affiliate Northern Blues, winning the Laurie Hill Trophy as club best and fairest.

Goddard is the second cousin of former Saint and Bomber Brendan Goddard.

Prior to playing with St Kilda Goddard played at Melbourne Grammar, Geelong Amateurs and TAC Cup team the Geelong Falcons.

At the start of the 2021 season Hugh Goddard with former Carlton team mate Alex Fasolo signed on with VAFA club University Blues.