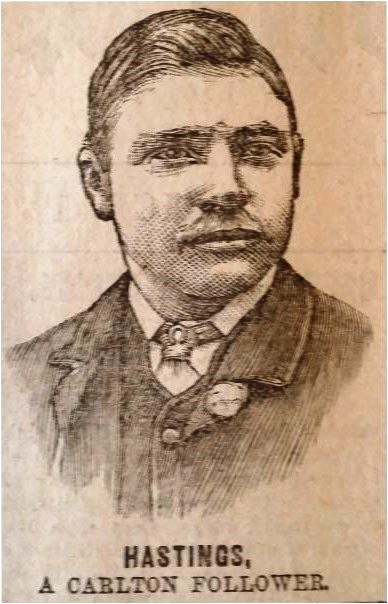 The Evening Standard reports G. Hastings May 04 1892 a ruck man from Essendon was recruited to Carlton.
(There is Essendon team photo from 1897 and a G. Hastings is standing to the side of the team. He looks somewhat similar to the sketch we have of Hastings on this page)
Volume 5 of Origins Of Australian Football has Henry Hastings playing 15 senior games in 1893, he then transferred to Fitzroy.. This publication also has a G.Hastings at Essendon in 1891.

1893 April 29
Hasting's name appears in a 35 man Carlton team list to play a pre season match against Carlton District on the University ground.

1893 Hastings playing for a Tasmanian side in a charity match at the M.C.G. scored a goal.
The Tasmanians drew with the South Australians, 7 goals each. July 1893.


1894 May 23 Wednesday
The Age reported that a Henry Hastings was granted a transfer to Fitzroy.
Same player?

A Carlton and Victorian cricketer named Tom Hastings (wicketkeeper/batsman) was playing in 1896 and was photographed in the Carlton Cricket Club's then World Record Breaking team.
A relation or same person? The Richmond Guardian November 04 1911 (p3) mentions Tommy Hasting as a former Essendon footballer.