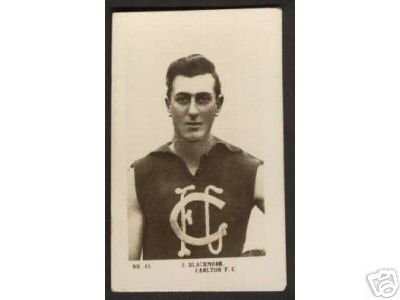 
George Hedley Blackmore was a promising full-back from Marybough in central Victoria when he was recruited by Carlton in 1923. Over the following five years, he transformed himself into a lively, free-scoring forward, and enjoyed a couple of excellent seasons during a bleak period for the Navy Blues.

Born in Maldon, near Castlemaine in 1901, Blackmore came to Princes Park as a 22 year-old, and was rushed straight into Carlton’s line-up at full-back for the first game of the 1923 season against Fitzroy at Brunswick St. The Blues dominated the match throughout the first half, but fell into a deep hole after half-time to be beaten by 23 points. Blackmore struggled to adapt to the pace and intensity of VFL football on debut, as he did the following week, when Carlton hosted St Kilda at Princes Park and were demolished by 44 points. He was omitted from the senior team at that point, and encouraged to find his feet with the seconds.

Eventually, Hedley returned to senior football late in the year – not at full-back, but as a follower resting forward. And it was his cameo role in Carlton’s draw with Collingwood in round 16 at Princes Park that set the stage for the rest of his career. At half time in that game, the Blues trailed by 15 points. On a hunch, Carlton captain-coach Horrie Clover asked his team to isolate Blackmore and his opponent at half-forward, and back Hedley to beat his man one on one. The ploy worked beautifully. Too good in the air and too clever on the ground, Blackmore took his opponent apart, kicking three goals and almost single-handedly dragging his team back into the contest. From then on, his place was almost exclusively in attack.

Having begun his career in guernsey 23, Hedley changed to number 8 in 1925 and his career reached a new high. Playing predominantly at half-forward, he kicked 32 goals in 14 games, despite the Blues’ overall poor record of five wins and twelve losses. In 1926 he had a sensational week between rounds 12 and 13, booting five goals against Hawthorn, and six against Melbourne, to finish the year with 26 goals from 17 games.

Then in 1927, a rift apparently developed between Blackmore and Clover, even as Carlton gelled into a strong combination and qualified for the finals for the first time in five years. Hedley’s only VFL finals match – another typically bruising, physical Semi Final against Richmond - ended in a last-minute victory to the Tigers, followed by his decision to leave Princes Park and accept a big offer from VFA front-runners Brunswick.

At that time, the Wicks had a potent attack and a questionable defence. So Blackmore returned to full-back, where his experience proved invaluable and he gave the Magpies excellent value for another five seasons. In 1930 he stepped up to the captaincy, before assuming the dual role of captain-coach in 1933. Mid-way through that season, he was replaced by another ex-Blue in Walter Raleigh.

Hedley had a son Arthur Blackmore who played reserve grade football for Carlton in 1944.