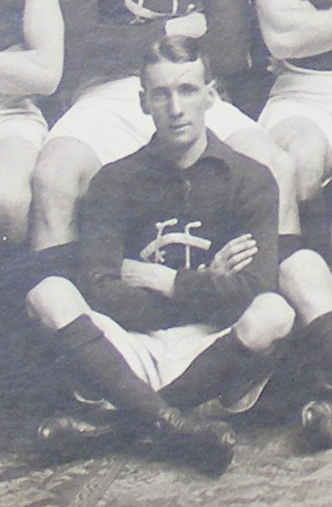 Harry Bell was born in North Carlton, and was recruited from Carlton District after he had previously played with Preston VFA. Bell's career at Preston in the V.J.F.A. from 1917 to 1919 culminated in him winning the Best and Fairest in his last year. In 1920 he moved to Carlton and captained the Carlton Juniors team before breaking into the senior side in 1921, where he played 55 games up until and 1927, this included kicking 5 goals. He also contributed off field as, club secretary from 1940 to 1951.

Despite his modest playing record, it was to be off the field that he made his major contribution to the Carlton Football Club as Secretary from 1940 to 1951. He was made a Life Member of Carlton, and in 1958, Bell co-authored 'The Carlton Story', the first in-depth history of the club with well-known Herald journalist and renowned football historian, Hugh Buggy. This book has been used as a reference source for the Blueseum.


During his days at Preston, Bell was also a boxer of some note in the flyweight division, having at one stage fought unsuccessfully for the Victorian title.

H. Bell was named on the wing in the Victorian team that played New South Wales on Sydney's Erskinville Oval, 18 August 1923.
8,000 people watched N.S.W. defeat Victoria 15.11.101 to 11.19.85.
Harry was named among the better players for the Vics.
This was a second Victorian team, as on the same day Victoria played South Australia on the M.C.G.

Southby and Tiger Bryan Wood fight for the ball.jpg