Haami Williams (pronounced 'Harmi') was recruited to Carlton with Pick 19 of the 1993 Mid-Season Draft, the same draft in which Tony Lynn was taken by the Blues. Williams was also on the Geelong FC playing list, in round 11 1993, he was on the Cats list with guernsey no.56 against the Blues, a week later he was on the Blues list wearing guernsey no.37 playing against the Cats. He was recruited as a half-back flanker / wingman.

He did not play a senior game with Carlton but was memorable for some goals off the half forward flank in the Reserves.

In later years, Williams found substantial football success in the Geelong & District Football League, both as player (including the 2007 Whitley Medal) and Coach. In 2004 Grand Final he was voted best on ground playing for Geelong Amateurs in their win over Ocean Grove. 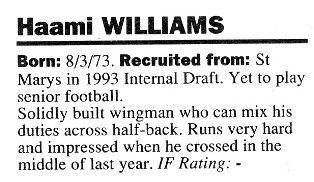