The 1945 Grand Final still stands alone today, 62 years later, as one of the most violent clashes in any sport to take place on Australian shores. Taking place less than a month after the official end of World War II, witnesses may have been forgiven for thinking that perhaps the war was still raging in the hearts and minds of the combatants that day.

South Melbourne had witnessed Carlton destroy a hapless Collingwood in the Preliminary Final a week earlier, overcoming their more fancied opponents using a mixture of highly skilled youngsters such as Ken Hands and Bert Deacon, and ruthless veterans such as Bob Chitty and Ron Savage.

South Melbourne went into the game almost unbackable favourites, although rumour has it that this didn't stop one wealthy South supporter, who reputedly offered all the players a generous cash reward if they brought home victory. The South Melbourne coaching panel instructed their players to match it with the violent Carlton lineup in the fisticuffs stakes. 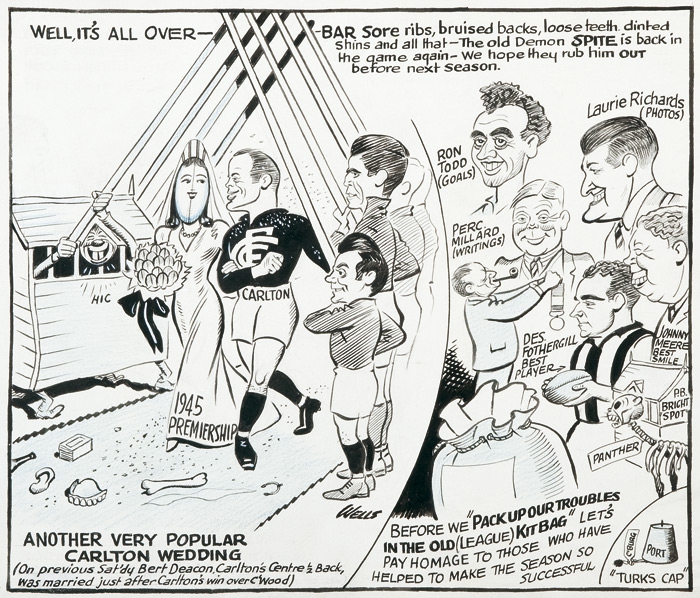 Click to expand
An incredible Princes Park record crowd of 62,986 people packed themselves into the terraces of Princes Park that day, and every single one of them would have walked away knowing they had witnessed a match that would live on in VFL/AFL, and indeed Australian sporting folklore.

Chitty won the toss and selected to kick with a strong wind. Percy Bentley had, through the use of the extensive Melbourne football grapevine, learnt of Carlton's opponent's preoccupation with our violent reputation, and instructed his players play the ball and get some early score on the board. This tactic reaped instant results as the Navy Blues skipped away to an early lead, albeit aided by South Melbourne's inaccuracy in front of goal. At quarter time Percy Bentley instructed Bob Chitty to "remove the kid gloves if the situation becomes desperate". These were to be telling words in the context of the match.

Laurie Nash and Kevin Smith goaled early in the second term to put South in front. Chitty must have determined that this made the situation desperate. The Carlton captain started off proceedings by laying out South's star rookie, and future Brownlow Medallist Ron Clegg. Clegg somehow miraculously regained consciousness, and while attempting to take his kick lined up in the wrong direction. Bert Deacon, ever the gentleman, pointed young Clegg in the right direction. Chitty was furious with his teammate, snarling; "I don't knock them down for you to pick up".

This incident sparked off many brawls between the players. As with the Preliminary Final a week earlier, there were no holds barred. Punches, elbows and even kicks were the order of the day as both sides continued to try and outdo each other. Umpire Spokes had even resorted to grabbing the ball and sitting on it, making mental notes of the combatants, in a vain attempt for tempers to cool.

Carlton rookie Ken Hands was to be the 'eye for an eye' matchup that South were looking for after the Clegg incident. There is some confusion as to whether it was South Melbourne's appropriately nicknamed Jack 'Basher' Williams, or backman Jim Cleary who had knocked Hands out cold in a behind the play incident about ten minutes before half time. When Umpire Spokes, who must have been nearing exhaustion trying to get the game under control, asked Williams why Hands was unconscious, Williams replied "I think he's got sunstroke".

This incident incensed a mostly Carlton supporting crowd at their home ground. Fights started to break out amongst the jam packed crowd, and police were almost powerless to do anything about it given the sea of humanity they'd have had to attempt to cut a swathe through to get to the incidents.

Umpire Spokes must have been incredibly relieved when the bell went to signify half time. A still unconscious Hands was carried from the ground on a stretcher, while a grinning Bob Chitty waved his bloody, bandaged left hand to a crowd that were screaming abuse and threats at the South players trying to get off the ground to lick their wounds. Amongst all the mayhem and chaos, the underdog Carlton outfit somehow managed to hold on to a two point lead.

The Melbourne skies opened up during the half time interval, and rain started to fall. Again, Percy Bentley, in his element amongst all the confusion, instructed his boys to concentrate on the ball while we had the wind. It turned out to be a master-stroke, as his opponents had become totally preoccupied with bringing about an untimely end to Bob Chitty.

While Chitty waged a one-man war with the entire South Melbourne line up, a rejuvenated Carlton line-up, inspired by the return of battered youngster Ken Hands, set about taking advantage of the strong breeze. Carlton kicked 5.4 that quarter to South's 2.1, skipping away to a healthy 23 point lead. Bob Chitty, complete with blood streaming from his head, hands and legs, and carrying a broken foot, led his team to the third quarter break with one goal in mind - do whatever it takes to stop South's more skillful lineup from taking advantage of the breeze in the last quarter.

Percy Bentley once again gave the instruction to the Blues as he did at quarter time - do what it takes to stop South using that breeze. Again it was Bob Chitty who lead the way, smashing open packs, and cleaning up whoever and whatever got in his way. His single-minded determination and complete disregard for anyone's safety (including his own) finally caught up with him when he was blind-sided by South tough man Laurie Nash. Chitty was in fairy land as trainers, police and ambulance men rushed to his aid. The massive crowd screamed for blood and got it when a massive brawl then broke out between Chitty's teammates and South Melbourne. It took several police to break up this particular brawl, and as they did, Chitty staggered to his feet, clearly and heavily concussed, and made his way to the forward pocket in an attempt to 'shake the cobwebs out'.

The minute play resumed Carlton swept the ball forward, and wounded hero Chitty somehow miraculously goaled. In the annals of football history, this must go down as one of the most courageous, uplifting goals in history. The goal all but won Carlton the match, but the fight was still far from over.

South Melbourne's Ron Clegg was flattened a second time that game, shortly followed by Carlton's Jim Mooring. Carlton then kicked the next goal, sealing victory. This sparked another all-in brawl, including police and spectators. One spectator that was taken into custody by the constabulary was senior Carlton player Fred Fitzgibbon, sitting out a suspension for brawling the previous week! Ken Hands scored the last goal for the Blues, an inspirational effort given the fact he was already heavily concussed and then received another smack in the mouth for his trouble from Jim Cleary.

Carlton stood tall in the last quarter, outscoring the Swans 3.4 to 2.5 in a massive effort against the breeze.

The report sheet reads like the rap sheet written up after a riot, and in many ways it was. Nine players and one non-playing Carlton senior member were reported, and a total of 68 matches in suspensions were handed down. Yet, it still seems as if there were many players from both teams that got away scot free. Injury reporting is scarce from this era, except to say that Bob Chitty had 27 stitches applied to a gaping wound above his left eye.

Vin Brown was resolute in defence for the Blues, staking his claim for a place among Carlton's proud history of phenomenal full backs. Ken Hands was inspirational, kicking three goals despite being knocked senseless. Bob Chitty, as always, was completely ruthless and had achieved what 14 weeks earlier had seemed more than impossible - to win thirteen of the next fourteen games and become Premiers.

1945 is a Premiership that will long be remembered fondly by Carlton fans. It was a Premiership we perhaps didn't deserve to win, as we were far from the most skillful team of the year. However, we were definitely the most determined. Sixty years on it still stands the test of time as an inspirational tale, of pure grit and determination, and refusal to be dictated to by the 'odds', no matter how hard they seem to be stacked against you.

Bloodbath marks War's end
Carlton can take some credit for their win in the roughest Grand Final in VFL history. It brought the first flag in League history from fourth place. Another first was that the four finalists were different clubs from those who played in the 1944 Finals. The Grand Final, won by the Blues by 28 points, has been described by some as a 'bloodbath' and by others as a 'miracle'. The bloodbath saw nine players reported on 15 charges; the miracle saw Carlton win 13 of 14 games. The VFL Tribunal passed judgement on rough play (see details above for reports and suspensions). Ron Savage who was suspended for eight weeks coincidentally won Carlton's best and fairest award for 1945. Ken Hands was named most promising player, and says he can't remember anything about the Grand Final, having played most of it in a daze. The miracle aspect in the Finals began with Carlton easily beating North Melbourne by 26 points, after leading 13 goals to two at three-quarter time. It continued with the comeback against Collingwood in the Preliminary Final, where all seemed lost again. The Blues were 28 points behind at three-quarter time and playing poorly. After Collingwood scored the first goal of the final quarter to stretch the lead to 34 points it definitely looked over - but a melee developed and this caused something of a transformation in the game. Jim Mooring belatedly went roving, and Carlton kicked seven goals without reply, four to Lance Collins to win this rugged encounter by 10 points (some say that this game was more violent than the Bloodbath Grand Final!). Then came the Grand Final, where a huge crowd of 62,986 somehow squashed into Princes Park. Demobbed soldiers were there in numbers, bottles were thrown on to the ground, and police had to help break up on-field fights. During one brawl in the last quarter Carlton centreman Clinton Wines bombed away for a goal which effectively ended the game. The final stanza of the Carlton miracle was written by Wines, Vin Brown, Ken Baxter, Bert Deacon, Ken Hands, Rod McLean and the rugged but talented Carlton enforcer Bob Chitty. - 100 Years of Australian Rules Football.

Nearly 10 years after this match, on 21 May 1955, South Melbourne's Laurie Nash talks about his "flattening" of Carlton's Bob Chitty in the final quarter and the reasons behind it. Laurie also talks about Carlton's tactics in the "Bloodbath" Grand Final.
To read The Argus interview click here> http://nla.gov.au/nla.news-article71883900

They Kicked Everything Except The Ball

The Recorder, Port Pirie S.A. (October 15) carried a report from one of it's residents who attended Princes Park for the big match.
To read click here> http://nla.gov.au/nla.news-article96175923