Oh the joy! Carlton defeated Fitzroy by 49 points at the MCG to win the club's first Premiership!

The crowd of 44,437 that packed into the MCG on Saturday September 22, 1906 set a new record for attendance at a sporting match in Australia, and was treated to a worthy Grand Final between a Fitzroy team on the decline after a sustained period of success, and a Carlton side on the verge of greatness. Both sides came into the game in good shape, although Carlton lost Martin Gotz to injury after he had played in the Semi Final. To complicate matters, his intended replacement, Bert Parke, was injured at training, so Les Beck received a late call-up. Fitzroy were in a similar position and made just one change; bringing in defender Wally Naismith for the injured Percy Sheehan.

The opening bounce was the prelude to an even first quarter, but after that Carlton’s defence tightened up and seized the initiative. Sharing the ball and streaming down the ground in waves, the Blues led by almost five goals at half time and Fitzroy were deep in trouble. At the long break, Fitzroy captain Ernie Jenkins roused his men with a passionate address, and they responded as he had hoped – by clawing their way back to within 14 points of Carlton at three-quarter time. However, that was where the Maroons dream of another flag ended. Inspired by their coach Jack Worrall and a defence that was near impregnable, the Navy Blues kicked six goals straight to a solitary behind by Fitzroy in the last term, to claim Carlton’s first, precious VFL Premiership.

One of the real highlights came when champion forward Frank Caine took a mark at least 70 metres from goal and surprised many by setting up a place-kick. ‘Silver’ launched into his run, made perfect contact, and the ball sailed straight between the uprights. Then late in the last quarter, Mick Grace marked and goaled to bring up his 50th major for the season – the first time ever such a feat had been achieved.

In fact, Carlton’s accuracy in front of goal was truly remarkable. From midway through the second quarter, when the Blues brought up their third behind, they set a new Grand Final record of 11 goals straight in a total of 15.4. Mick Grace won the League goal-kicking award with his unprecedented 50 majors, ’Silver’ Caine finished runner-up with 37, and George Topping contributed another 25 in a Carlton attack that was potent indeed.

The team that marched to glory on this unforgettable day for the Carlton Football Club had no passengers. While every man in navy blue did all that was asked of him, Billy Payne, Norman Clark, Les Beck, Doug Gillespie, the centre line of George Bruce, Rod McGregor and Ted Kennedy – along with Grace and Caine – were simply outstanding.

Red Hot Navy Blues flatten Maroons
Carlton has won its first Flag of any kind since 1887. 'Center' in Melbourne Punch has been moved almost to poetry in his report after the Grand Final was won by the 'Brewers' by 49 points against Fitzroy. The record crowd of 44,437 seemed on Carlton's side. 'Carlton.. ain' they blithrers', 'Would have won if it had snowed', 'On Saturday's dewy eve such scraps of dialogue were heard all over this great, great city. No matter where you turned even in the pub, your eardrums were tickled with 'Grace', Great game', Should 'ave 'ad his shot', 'Jack Worrall', 'Bongo' and other classic sounds that pattered like a rain of Grand Italian Opera. 'Everybody was decorated with blue and white ribbons. Their talk was blue. Everybody wanted to get into the blue tram and have a ride. At the finish they were drinking blue beer... it tasted blue anyhow. The pubs dispensed free beer. Free beer. Think of it, free beer in Carlton. 'After a grand Fitzroy fight-back in the third quarter they had little left in the last. Carlton put on six sixers accompanied by wild warcries and chants of triumph, and waving of hats, scarves, brollies, other people's tall hats, bits of fence, husks of grandstand and anything else lying handy. 'After 19 dormant years the Old Blues were sailing gaily up the happy harbour, for home and beauty. The globule had been sent through the sticks so often that it seemed to know the way. 'By the end they were actually handballing, handing the orb round like it was a cheese sandwich, passing like passengers through turnstiles, all in turn, and shoving it right through the gaudy uprights without frightening the children. 'Carlton broke all the records, attendance, goalkicking, artistic finish, Maroon superiority, most of the fence and heaps of other things. 'The Blues put up one of the finest exhibitions this wondering world has ever seen. It was a greater and finer exhibition than the Pyramids, or the Crystal Palace or the Taj Mahal or the Melbourne Waxworks. The Brewers played team ball like a well oiled clock, shining in clusters rather than as bright particular stars. - 100 Years of Australian Rules Football. 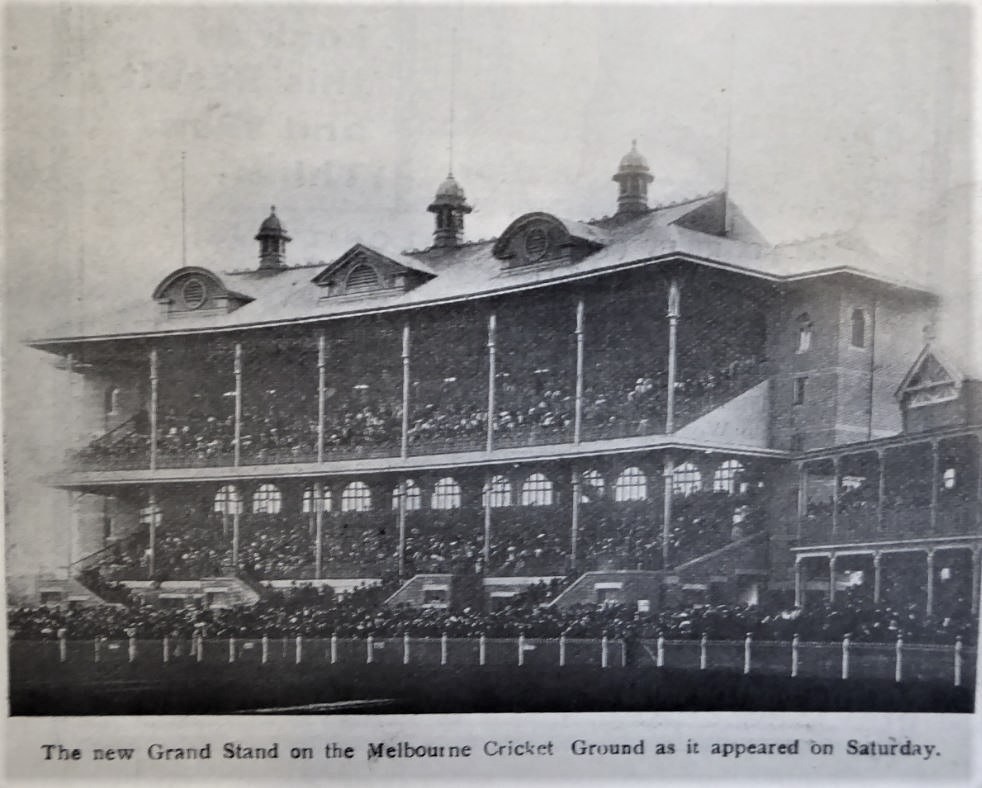 The Grey Smith Stand stood for 60 years until it was demolished in1966
SLV: Illustrated Sporting and Dramatic News Sept 29, 1906

The full story of this day, the game and the implications of our first Premiership are explored in this Blueseum article, The First of Many, including extracts from the club's Annual Report and the press of the day.

The North Western Advocate and the Emu Bay Times in Tasmania published The Age's report on the game.
To read click here> http://nla.gov.au/nla.news-article65154381

A full report of the Grand Final was reported in the Sydney newspaper The Referee;
To read click here> http://nla.gov.au/nla.news-article120324200

Last Game: Ike Little
Former Carlton player Geoff Moriarty played his last game this day.
Geoff started with the Blues in 1891 playing 14 games for 1 goal, and crossed to the 'Roys the next year and played there for 15 years.