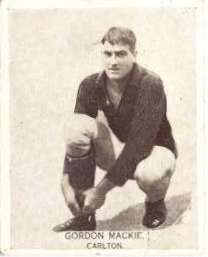 Gordon Mackie was a tough, determined centre half-back from Preston who joined Carlton in 1932 and was something of a sensation in his first two seasons. An excellent high mark and a fierce protector of his team-mates, he played finals football in his debut season at Princes Park, and was Carlton’s best player in our 9-point loss to Richmond in the 1932 Grand Final.

Gordon’s younger brother; Ken Mackie, played a combined total of 69 games at Fitzroy and St Kilda between 1930 and 1938, and kicked 70 goals, mainly from half-forward. Carlton first tried to recruit the Mackie brothers from Preston in 1930, but Ken chose Fitzroy instead, and the Bullants wouldn’t budge on his more accomplished older brother. Negotiations dragged on for months, before Gordon was eventually cleared in time to play his first match for the Blues against Fitzroy at the Brunswick St. Oval in the opening round of 1932. He was solid, if unspectacular in the key defensive post, as the Blues were beaten by 16 points.

Mackie had played 10 games for Preston in 1930 and then applied for a clearance to Carlton. Preston's policy at the time was not to clear players until they had given their local club a reasonable level of service. Mackie was selected for the opening Preston game in 1931 after his initial application was refused, but did not turn up for the match. After a second application was refused some weeks later, Mackie agreed to return for a key game, and his performance in that game was described alternatively as 'insipid', 'disinterested' and 'unconvincing". Preston officials took the view that Mackie had played 'dead' and it took another four applications and most of the 1931 season before Preston declared "good riddance" and he was finally cleared.

In his third game, Mackie was shifted into the ruck by his coach Dan Minogue, and kicked his first career goal in Carlton’s fighting 1-point victory over Richmond. He scored another major the following week in a huge win by the Blues over Hawthorn, and there his goal-kicking exploits ended. He was back in defence for round 5, and a slashing performance in a great win over Collingwood at Princes Park convinced Minogue that Mackie was first and foremost a centre half-back. Gordon settled into the post, and was one of the major factors in Carlton claiming the minor premiership.

After a disappointing Semi Final loss to Richmond, and a spectacular Preliminary Final demolition of Collingwood, Carlton and Richmond squared off for the 1932 flag, with the Blues facing the unsavoury prospect of a fifth straight finals defeat by the Tigers. The game was a classic, and Carlton had nosed in front by four points as time on began in the last quarter, before Richmond found some last-gasp desperation and swamped the Blues right on the final bell to snatch victory by 9 points. In the key defensive post, Mackie fought an enthralling duel with Richmond’s Strang brothers; Gordon and Doug, who rotated through centre half-forward, and all three were stars of the game.

In his second season Mackie’s potential was recognised when he was selected in the Victorian state team that returned from the Sydney Carnival undefeated. By then Carlton’s first choice at centre half-back, he had another impressive season, although it wound up with more September disappointment when the Blues lost another clinker of a Semi Final to Geelong.

Mackie’s third year in 1934 began with the same steady promise, before a serious foot injury – a broken bone at the base of one toe – forced him off the field for all but eight games. That injury plagued him throughout the rest of his career at Carlton, and sadly, he was never the same player again. Although he carried on playing with an orthopaedic insert in his boot, and constantly experimented with different types of strapping, he managed only 25 games between 1934 and 1936. He did manage to get himself right for the 1936 finals, and led Carlton’s defence against Melbourne in one Semi Final. But the Blues’ inaccuracy in scoring 11.22 (88) was costly, because the Redlegs managed 14.13 (97) and won by 9 points. Mackie's career with Carlton was also controversial and in 1934, he was allegedly involved in an incident that left Collingwood captain Sid Coventry with a suspected fractured skull.

That final was Mackie’s 60th match in Carlton guernsey number 24, and it proved to be the last of his career. Although still troubled by his injured foot, he attempted to play on in 1937, only to suffer a badly-broken hand when he was accidently kicked during the Reserves curtain-raiser between Carlton and South Melbourne at Princes Park in the opening round of the season. Again the damage was substantial, and not long afterward, Mackie retired from VFL football on medical advice.

Friday, June 26, 1936:
Carlton refused a clearance request for Gordon Mackie to be cleared to St. Kilda. He had previously asked for a clearance in 1935 to join his brother Ken at the Junction Oval, but that, too had been denied.