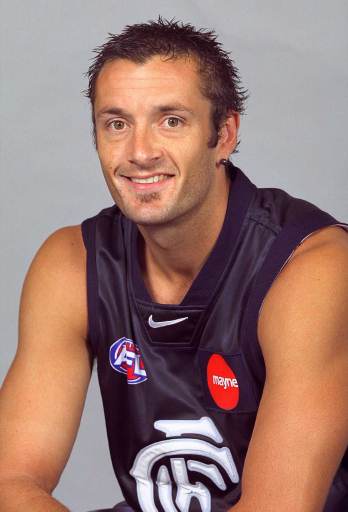 Glenn Manton was 22 years and 22 days old - and proudly wearing Carlton’s number 22 guernsey - when he ran down the player’s race and out on to Princes Park to play his first game for the Navy Blues against Geelong in round 12, 1995. A few short months later, he stood on the podium at the MCG on Grand Final day, basking in the glory of Carlton’s magnificent 16th Premiership win.

Barely three years beforehand, Manton had begun his AFL career at Essendon, and in hindsight, it was quite remarkable that he was ever let go by the Bombers. Born and raised in their neighbourhood, he played his early football at Strathmore and East Keilor, before joining the Under-19 squad at Windy Hill and working his way up through their Reserves team to enjoy his first senior match in 1992. Although ‘only’ 185 cm, Glenn’s great asset was his ability to play tall in defence. A very safe mark for his size, durable, and a clever reader of the play, he started at Windy Hill at a time when Essendon boasted a talented list, although recurring hamstring injuries in 1993 - and doubts about his commitment - didn’t help his prospects.

The facts were that Glenn was openly enthusiastic about many other aspects of his life outside football. Well-read and articulate, with a keen interest in social issues and politics, he didn’t quite fit the mould of a nineties footballer in the eyes of some at Essendon. As a consequence, and because the Bombers were still fresh from their Premiership triumph over Carlton in 1993, Manton was delisted in '94, having played 21 games in three seasons.

Carlton threw Glenn a life-line in the 1995 Pre-Season Draft, seeing him as a potentially handy back-up to an already strong defensive unit. He was assigned guernsey number 22 and, partly because of his gratitude to the Blues for giving him a second chance, whole-heartedly embraced the club. From his earliest days at Princes Park, he never walked past the portrait of Harry ‘Soapy’ Vallence in the clubrooms without giving the glass a friendly tap with his knuckles – to acknowledge the link between himself, and the legendary Carlton full-forward who had also worn number 22 while kicking 722 goals in 204 matches.

Manton found his feet in the Reserves for the first half of his debut year, before being granted that precious first opportunity at senior level at Princes Park against the Cats. In a thrilling, top shelf contest, Carlton got up by three points and Blues fans got their first look at the lean ex-Bomber with a slightly awkward kicking style and a trademark black pressure bandage on his right elbow. At the age of 18 that arm had been almost severed in an accident, and for a while it was feared that Glenn’s football career was over. Thankfully, that proved not to be the case.

Once he had shown his wares in that first game, Manton was retained in the side throughout the rest of that fabulous year. Quick enough for the flank, and good enough to pinch-hit in a key post, he was seen as the ideal interchange player and even drifted forward to kick the odd goal. Meanwhile, the Mighty Blues continued an unbeaten run of 16 consecutive matches, culminating in a 61-point slaughter of Geelong in the Grand Final. As he had done during both lead-up finals, Manton started on the bench in the Big One, and was more than handy across half-back in the second half. After just 12 games for Carlton, Glenn’s name had joined Soapy’s on the number 22 locker.

In 1996 Manton stepped up further, and was one of five Blues who played every game (along with Brett Ratten, Ange Christou, Stephen Silvagni and Anthony Koutoufides). Carlton however, got the staggers and slipped to fifth, and the finals were a disaster. While West Coast and Brisbane handed out successive thrashings, Manton was one Blue who stood tall - taking the most marks for the year, making the top 10 list for disposals, and laying the highest number of tackles. These were astounding stats for a regular key defender.

Over 1997-98, Carlton’s fortunes dipped further as many of the stars of the ’95 Premiership retired. Manton was called on to shoulder more of the on-field leadership, and showed that he could be an effective forward target in favourable circumstances, although his real value was still in defence. When Carlton caused a huge boilover in beating flag favourites Essendon by 1 point in a sensational 1999 Preliminary Final, Manton was used in a decoy role at full-forward and got the Blues off to a great start with a goal after only a minute of play. But the game will forever be celebrated for the individual brilliance of Anthony Koutoufides, a match-saving tackle by Fraser Brown, and the obstinate courage of the entire Carlton team.

Regrettably, Essendon only had to wait one more season to wreak revenge on the Blues. In the following year’s Preliminary Final, they inflicted a seven-goal defeat on a Carlton side seriously weakened by the absence of injured champions Koutoufides and Silvagni. Manton found himself on the last line of defence during the finals, and at full-back in a makeshift defence against the Bombers.

By this time, Glenn had also became a regular guest on the top-rating Channel 9 program; The Footy Show, and was proving himself to be a relaxed and capable media performer. In 2001, he played every game again under a new coach in Wayne Brittain, until the Blues bowed out of the finals after a typically tough Semi Final loss to Richmond. That defeat heralded bleak times ahead for everyone at Princes Park in 2002, as Carlton crashed to near oblivion at the foot of the ladder, and Manton’s season was wrecked by injuries to a knee, a calf and ultimately, a broken leg. 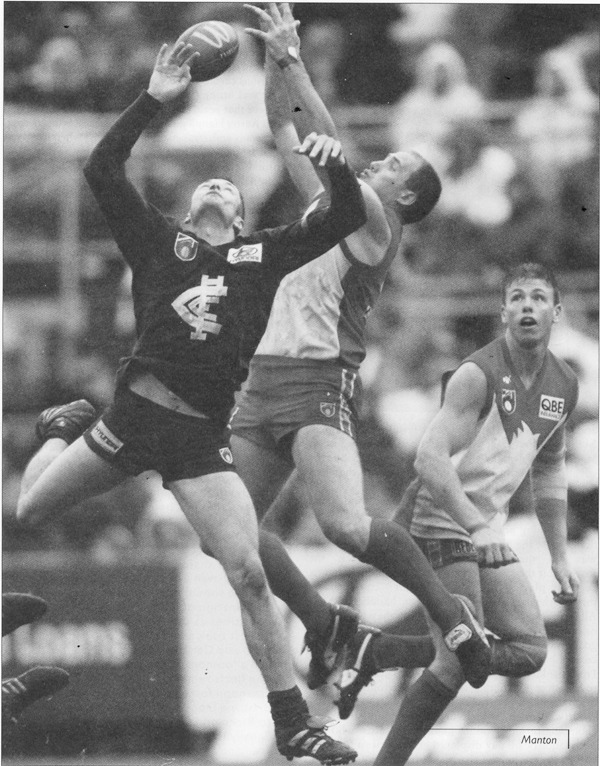 After two years in charge, Brittain was sacked by a nervous Carlton board, and replaced by former North Melbourne Premiership coach Denis Pagan. Manton's role then came under question because Pagan favoured 'gorillas'; big, strong key position players, and one of his first decisions was to draft North Melbourne’s veteran defender Mick Martyn, who had only just been delisted by the Kangaroos. Martyn was installed at full-back for the 2003 season, and Manton played only five more games before being delisted himself. His final match was a traumatic, record defeat by North Melbourne on a Sunday afternoon at Docklands Stadium in round 22, 2003; a somewhat cruel and unfair conclusion to a good career.

In the years after his retirement from League football, Manton immersed himself in a diverse range of projects. After completing a degree in Education, he founded the Whitelion Foundation, to provide guidance and inspiration to troubled young people from all sectors of the community. He has written three football-themed books, including Mongrel Punts and Hard Ball Gets, while serving as a director of the Melbourne Fringe Festival. In 2008 he took to the stage with a well-received standup routine at the Melbourne International Comedy Festival, and has expanded his public speaking roles to include corporate, charity and sporting groups. He was a regular commentator on a number of Melbourne radio stations, and even found time to train for a place in the 4-man Australian Bobsleigh team that was aiming to qualify for the 2006 Winter Olympics in Italy.

Through all of this, Glenn still chased a football around suburban grounds on weekends, as his love affair with the game continued. In 2010, Manton joined Albion in the Western Region Football League, and was one of the Cats’ best as they won their first 1st Division flag in over 25 years. He then retired from the field for good, but coached Albion into a second-successive Grand Final in 2011, only to lose to Spotswood.

Furthermore, Glenn has been a good friend and adviser to the Blueseum since our earliest days, and has often provided his insights and answers to readers' questions. Some of his most recent contributions can be found here.