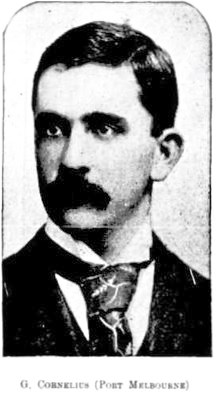 In Season 1901, Cornelius played his one & only game for Carlton.

Earlier, in 1898, Cornelius had played 16 games with South Melbourne. He was originally from Port Melbourne.

Cornelius was born in Emerald Hill (Sth Melbourne), he passed away on the 7th July, 1966 aged 92.

This image of G.Cornelius is from a gallery of VFA captains published in Australasian newspaper May 18 (p24) 1895.

"George Cornelius (Port Melbourne) was three years ago, a member of the West End, a third rate junior club, and he now ranks high amongst the best of the seniors.
Few men are neater than he is in handling the ball, and there is certainly no fairer player in any team competing for the premiership." (Australasian May 18 1895)