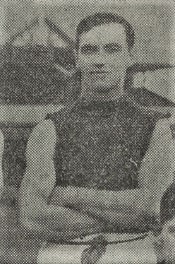 Like many other Tasmanian sportsmen of his generation, Garnet Gordon Goodrick was a prominent footballer and cricketer. The first captain and coach of the New Town Football Club, he was 28 years old and playing for North Hobart when he answered an SOS from Carlton and moved to Melbourne to join the Blues in 1923.

Carlton had been worthy VFL finalists during the previous three seasons, but got off to a horror start that year, winning just two of their first seven matches. By calling Goodrick into his team, Blues captain-coach Horrie Clover hoped that Garney’s experience and maturity might help stop the slide. Unfortunately, that wasn’t the case.

In guernsey number 29, Garney played his first match at full-back in a 5-point loss to Geelong at Princes Park in round 9. Although he was serviceable in defence in his first couple of games, it was soon obvious that he was more value to the team around the ground as a follower. That was scant consolation however, because the Blues continued losing games they should have won, and wound up in a dismal seventh place on the 9-team ladder.

Former Fitzroy star Percy Parratt took over as coach of Carlton in 1924, with Clover staying on as captain. Despite the change, the Blues continued to disappoint and once again finished seventh. Goodrick played 11 games and booted three goals, as tensions within the team began to mount toward the implosion of the following year.

The VFL expanded to 12 teams in 1925 with the addition of North Melbourne, Footscray and Hawthorn. With seven new players on debut in round one, Carlton was thrashed at home by Geelong to the tune of 38 points. Goodrick then decided that he had had enough. He retired immediately from VFL football, and joined Northcote in the VFA to finish off the year. Under three different captains and three different coaches, the battling Blues wound up ninth in Goodrick’s absence, ahead of only the three expansion teams.

Sadly, the postscript to Garney Goodrick’s football career is not a happy one. He didn’t return to live in the Apple Isle, but stayed on the mainland. In 1928 he became the licensee of the Donnybrook Hotel in Melbourne’s outer north. Barely a year later – aged just 34 – he died at South Melbourne in unexplained circumstances.
DOD: 26 January, 1929

Before joining the North Hobart club, Garney, who was from the Huon, had played with the Franklin Football Club. (Huon Times July 27 1920 p2)

Prior to his arrival at Carlton, Goodrick played one first-class cricket match for Tasmania against Victoria at the MCG. It was not to a memorable occasion for Garney however, as the Vics - led by Bill Ponsford, who hit 429 runs - made a record score of 1059 (all out) in their first innings. Goodrick made 1 and 20 in his two innings for Tasmania, and went for 114 runs in the 22 overs he bowled.

At New Town's annual meeting (World - Hobart March 21 1923);
"The committee wished to place on record their appreciation of untiring and excellent services rendered by G. Goodrick, for two years captain and coach of the club, who had recently decided to move to Melbourne, where Carlton would have his services this season. The committee extended to him best wishes for his success."