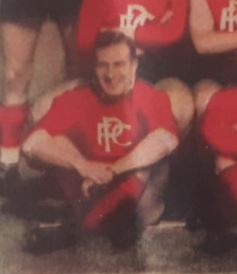 Fred Lalor played reserve grade football for Carlton from 1947 to 1948.

On June 12th 1948, Fred Lalor represented the VFL reserves team in a game played against the Werribee Association. He played this game with fellow Blues team mate Ken Aitken. Lalor would later play in the VFA for Preston.

Jezza's profile as a full-forward.