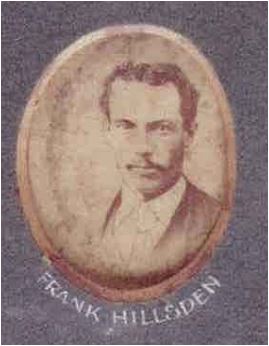 Harriet D. and Robert Hillsden both aged 29 arrived in Sydney April 16 1850 on the "Elizabeth" (711 tons) with their children, Charles, Frank, Harriet and Lucy. They had departed Plymouth England on December 21 1849. (Ozships)

Frank (Francis) Hillsden was on the first committee for the Carlton Football Club.

1865 "Amongst the other men of the team who gave their usual number of spills to the opposing side, the committee particularly noticed the hard, splendid throw of the Warehouseman's captain, Mr. Clark, by Mr. Hillsden, who collared Mr. Clark whilst running with the ball and threw him over his shoulder in a splendid fall."
(The Herald June 14 1919)

1866 Captained the President's 20 against the Vice President's 20 during the practice period for a football donation by Mr. George Coppin (Carlton President) and distinguished himself for Carlton against South Yarra.

1867 F. Hillsden. One of the players to Captain Carlton during the season.
Known as the "Carlton Terror".

1868 An outstanding player for Carlton.

1876 Hillsden listed for this year. Frank, Charlie, or someone else?

.* Frank (aged 3) and Charles Hillsden (less than 1 year old) arrived on board the "Elizabeth" with their family on 16 April 1850 from Ballygawley, County Tyrone, Ireland. Blueseum believes this could be the Hillsdens associated with the early days of the club.