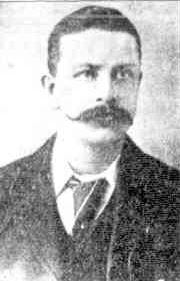 Little is known about F. Blackham.
The Herald newspaper in a pre season report on each club's coming prospects for the 1896 season, mentions F. Blackham amongst a group of new recruits for the Blues.
He was recruited from Albion United.
Blackham's name only appears in the game against Ballarat.
There is no information on the Second Twenty or Reserves as yet found for this year.

1896 May 02
The Blues had the bye in the opening round of the new VFA season.
Carlton played Ballarat at Saxon Paddock.
Blackham was named in the 28 man Carlton squad that caught the train to Ballarat.


1897 May 09
The Argus reporting on the first round of the newly formed V.F.L. competition on Saturday May 7, says that F. Blackham, the Carlton cricketer, was playing for the Melbourne F. C.
Fred Blackham born 6 April 1873, played the 1897 V.F.L. season with Melbourne playing 2 games.

In 1923 Mr. F. A. Blackham at a Geelong match presented a copy of the Rules of the Geelong Football Club dated 1859.
His father F. K. Blackham had played for Geelong in its very early days
The Geelong Advertiser said F. A Blackham was a part proprietor of the "Southern Cross" newspaper of Brighton. He had played football for Brighton and for Melbourne. In 1898 a knee injury forced his retirement. http://nla.gov.au/nla.news-article166021551