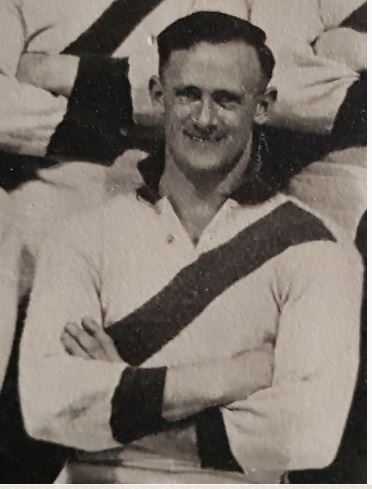 In a career that spanned just 64 days at the height of World War II, Jacob Ernest ‘Ernie’ Spence played four matches for Carlton, but was only on the field for the first bounce once. A lightweight winger from Yarraville in the VFA, he was 19th man in his first three appearances, and celebrated the third win of his career in his final game.

One of three brothers who all signed up for wartime military service, Spence had had a crack at VFL football with Footscray earlier in his career, without progressing further than the Bulldogs’ Reserves. When war was declared, he joined the Royal Australian Engineers, who put his trade skills to work at their large Footscray workshops.

At about the same time, Ernie joined Yarraville, and in early 1944, he found his way to Carlton. Wearing guernsey number 33, he was included in the Blues’ senior team as 19th man in the opening game of the season, when Carlton lost to South Melbourne in what proved to be Spence’s only defeat in navy blue. He waited a month for another opportunity, but was back on the bench when Carlton beat Richmond and Geelong in succession in rounds five and six.

Omitted again after that, Ernie spent three weeks cooling his heels in the seconds, where his consistency eventually earned him a recall to the seniors - in the starting 18 at last - for the home match against Fitzroy in early July. Named on a wing to partner Les McCann in the centre and Vin Brown, Spence enjoyed his third victory on the trot when Carlton cruised home by 30 points.

Although on paper it was an easy win, Blues coach Percy Bentley apparently decided that Spence’s effort fell short of expectations, and he was left out of the team again the following week. At some time between then and the end of the season, Ernie realised that his time was up at Carlton, and he headed back to Yarraville.

Further information and images can be found here. https://www.bayanne.info/Shetland/showmedia.php?mediaID=1665&medialinkID=2284