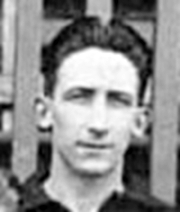 At just 165 cm and 64 kg, Ernest Walter (Ernie) McAlpine was among the smallest men ever to play for the Navy Blues. An elusive rover-forward recruited from NSW border club Hume Weir, his career at Princes Park spanned 14 games over three years. In his last outing in navy blue, he earned a footnote place in Carlton’s history as a member of our ground-breaking 1926 Reserves Premiership team, and fourteen years later, volunteered to fight for his country in World War II.

Unfortunately for him and for Carlton, McAlpine’s first season at Princes Park in 1924 was not a happy one. Although he kicked two goals in his senior debut - a narrow loss to South Melbourne in round 7 at Princes Park – overall, his first nine senior games produced only two wins, and by mid-season, disappointment and frustration had spread throughout the club. The Blues eventually tumbled to second-last on the 9-team ladder, and Ernie decided that he had had enough. He headed back to the bush, intent on enjoying his football again - until Ray Brew’s appointment as captain-coach of Carlton for 1926 forced him into a rethink.

Therefore, after a 12-month absence, Ernie decided to have another shot at the big time with the Blues. His new coach provided him with plenty of encouragement too, by naming him as first rover in four of Carlton’s first seven games of the year. McAlpine then went back to the Reserves for a month, before he was recalled for what turned out to be his last senior game, against improvers St Kilda at Princes Park in July.

On that cold, drizzly afternoon, Carlton eventually shook off the Saints to win by 15 points. McAlpine was then omitted from the seniors again and spent the rest of the year playing with the seconds. On Melbourne Show Day 1926, (Thursday, October 9) at the MCG, Carlton Reserves defeated Geelong Reserves by 52 points in a one-sided Grand Final, to claim the Blues’ first-ever lower grade Premiership. Ernie was a standout as he roved to a dominant ruck, and was named among the Blues’ best on an historic occasion.

McAlpine then bowed to the inevitable and told the Blues that he wouldn’t be going on. Having played 14 senior games and steered through 11 goals, he handed in his number 28 guernsey, and bid farewell to VFL football at the tender age of 24.

In the ensuing years, Ernie married, and settled in Flemington, the place of his birth. He was 37 years old by 1939, but that didn’t deter him from joining up when Australia became embroiled in World War II. Assigned to the infantry, he was a foundation member of the 2/23 Battalion when it was formed in 1940. Five years later, he had been promoted to the rank of Staff Sergeant.

Throughout those dramatic times, the 2/23 took part in some of the most iconic battles of the war; including Tobruk and El Alamein in Africa, the desperate clashes at Lae, Finschafen, and Sattelberg in New Guinea, and the amphibious assault on Tarakan in the last months of the conflict.

Thankfully, McAlpine got through all that in one piece, and returned to Australia to be discharged in November, 1945. He and his wife Elizabeth continued living in Flemington, and Ernie resumed his allegiance to the Old Dark Navy Blues. After celebrating three Carlton Premierships in the four years prior to 1982, Ernie passed away at the age of 82, on June 1, 1984.

The Corowa Free Press May 24 1932 (p5) reports Ernie McAlpine is taking up umpiring in Albury this season.