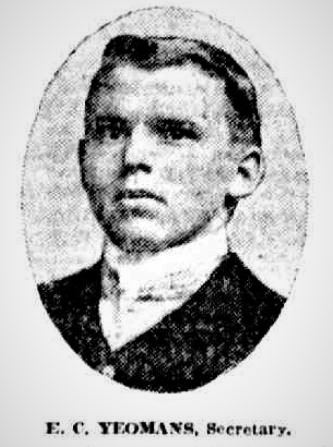 Yeomans played 3 games and kicked 1 goal for Carlton in 1905 after being recruited from Northcote. All 3 of the games he played in for Carlton were wins. Yeomans later played with VFA club Preston.

Carlton to Preston
"Edgar (or "Son" as he was universally known) Yeomans played for three years and later became a well known administrator in cricketing circles, firstly with Northcote and later managing Victorian Sheffield Shield teams as well as holding senior positions with the Victorian Cricket Association. After a failed real estate agency, he became well-known in the new motion picture industry, initially as secretary-manager of the Westgarth Theatre in Northcote and later running the Sun Theatre in Yarraville. Remarkably, the pair are amongst just a handful of suburban theatres still operating today. Yeomans eventually built his own theatre in Footscray where he lived during the later years of his life".
http://websites.sportstg.com/get_file.cgi?id=113494