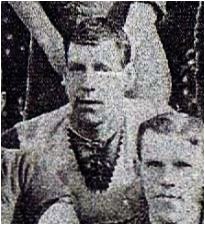 Edgar J. Fitzgerald recruited from Star of Carlton in 1883.


A leading player in the 1883 season.
(Centenary Souvenir of Carlton Football Club, p16)


1891 June 13
E. Fitzgerald was named in a Carlton "Old Players" squad to play a charity match against a similar Geelong side on the MCG.
George F. Bowen the following week in his column in Punch about this game mentions talking to Agar Fitzgerald. Perhaps a printing error?

1883 R/E. Fitzgerald was among the best in a Carlton scratch team that beat a strong Essendon side at Princes Oval 3.13 to 1.10.
8,000 people went to Princes Oval to watch the game but when they heard the Dark Blues could only field a scratch team because of internal dissension interest waned, and an Essendon win was regarded as certain.
But, surprisingly, this scratch Carlton team, "a thing of shreds and patches", rose to the occasion in a magnificent way.
One of the most sensational reverses of the year.
(The Carlton Story, H.Buggy and H.Bell, p55)

Another report (Age July 05 p16) mentions Agar Fitzgerald as a former player. Edgar/Agar similar, maybe a misprint? Although the Age does say he played in 1879.

Edgar was recruited from Star of Carlton along with Richard "Dick" Fitzgerald, perhaps a brother?