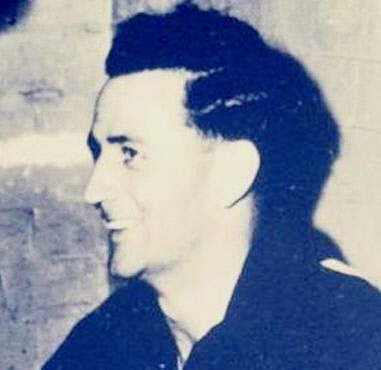 A pacey, stylish wingman for the Blues in a fine career spanning eight seasons, Doug Williams was a member of Carlton’s legendary 1945 and 1947 Premiership teams, as well as the losing Grand Final side of 1949. Recruited from Yallourn in Victoria’s Latrobe Valley in 1944, he was a typical centre line player of that era, in that his task was to provide a link between defenders and forwards, and to set up scoring opportunities for others. Therefore, he rarely ventured into attack and kicked just seven goals in his 120 matches, but he was widely regarded as one of the game’s outstanding centre-line players of the post-war years.

In July 1944, as World War II raged across the globe, Doug was given his first opportunity at senior level when Carlton travelled west for a round 11 match against Footscray. On that typically wet and windy afternoon at the Western Oval, Carlton’s scoreless last quarter was costly, and Footscray got home by three points. Williams’ first-up effort was impressive however, and he retained his place in the side throughout the rest of the year as Carlton finished fifth – missing out on a place in the finals by two points.

In 1945 - Doug’s second season - Carlton got off to a very shaky start. Three heavy defeats in a row sent the Blues tumbling to the bottom of the VFL ladder, before a stirring mid-year revival culminated in a 53-point thrashing of Footscray in the last of the home and away rounds. That win snatched fourth place on the ladder for the Blues, and set the stage for the most infamous final series in VFL/AFL history.

Seven years of bloodshed ended in August 1945, when the Japanese Government signed an unconditional surrender to the Allied nations. In celebration, the VFL proclaimed the 1945 final series – to be contested between South Melbourne, Collingwood, North Melbourne and Carlton - as the Victory Premiership. Instead, the vicious and violent flag decider between Carlton and South Melbourne ensured that it would be forever remembered instead as the year of the ‘Bloodbath’ Grand Final.

Carlton’s path to the ’45 Premiership was littered with the carcasses of North Melbourne and Collingwood, who were both vanquished in hard, spiteful games on the way to the decider. For Doug Williams, gaining a place in that Premiership play-off topped off a good season. He had missed just two games since his debut, and followed up his selection in the Victorian state side earlier in the year by controlling his side of the ground in Carlton’s Preliminary Final win over Collingwood.

On Grand Final day, Doug lined up against South’s Billy King, who, like Williams, was considered a star in the making. King later paid tribute to his opponent for keeping him out of the fierce physical clashes – some within the rules, but most without - that began in the second quarter and intensified as the Grand match degenerated into a series of rolling brawls. There were passages of good football – even when the rain came in the second half - but they were instantly forgotten amid the mayhem. Eventually, the Blues’ inspirational captain Bob Chitty led his team to victory by almost five goals in a clash that would resonate through the league for years afterward. Nine players were reported, on a total of fifteen charges, and the eight found guilty were handed suspensions totalling 68 games.

Carlton’s eighth VFL Premiership in 1947 is fondly remembered for the last-minute goal by Fred Stafford – a celebrated snap-shot that won the ultimate football prize for the Blues by one point - and for the outstanding leadership of our first-year captain, Ern Henfry. A champion centreman from WA who led by example, the key to Henfry’s game was his superb disposal, which brought those around him into the game. Among those to benefit most from his new captain’s influence was Doug Williams. He, Henfry, and Fred Fitzgibbon (himself notorious for his part in the 1945 Finals battles) made a formidable combination across the middle of the ground for Carlton, and were a driving force for the Blues throughout the ’47 finals.

When Carlton shaped up to Essendon in 1949 Grand Final, Williams, Henfry and Fitzgibbon plunged into the fray together once more. But this time, neither they nor their team-mates had any answer to a rampaging Essendon. Spearheaded by their young full-forward John Coleman, the Bombers blitzed the Blues by 73 points – bringing to an end a golden era of three Grand Final appearances in six years by the team from Princes Park.

Perhaps inevitably, Carlton began a period of stagnation in 1950. After almost a decade of success, the champions who had sustained the Blues through the tough football campaigns of the war years had reached the twilight of their careers, and the team began fading to the lower half of the ladder. Still, Williams maintained his form, leading Percy Taylor of ‘The Argus’ to write; “…courage, tenacity and good disposal are the chief characteristics of his play. He is the type of player that most clubs are keen to have about the place, as he is reliable, reserved and an excellent club man at Carlton.”

On a wet Saturday afternoon in July at Glenferrie Oval, after Carlton beat Hawthorn by 17 points, Williams brought the curtain down on his senior career in the navy blue number 12 guernsey. He wasn’t quite finished however, and stayed around long enough to celebrate one more flag, when Carlton beat Essendon by 12 points in the 1951 Reserves Grand Final. Doug later said that that last Premiership at Carlton was very special, because he was able to play alongside his brother Morris (‘Mossie’) in another flag victory for the Navy Blues. A typical report from the match stated that Doug Williams “was the master of the MCG,” and a week or so later, at Carlton’s end of season dinner, Doug was awarded Life Membership.

In 1952, Williams was appointed captain-coach of Tasmanian club North Launceston, and took the Robins into the NTFA finals at his first attempt. But home soon began calling for Doug and his wife Margaret, and after just one year on the other side of Bass Strait, they returned to the Latrobe Valley. There, Doug capped off his career in spectacular fashion when he joined the Morwell Tigers, and led them to a famous victory over his former club Yallourn in a replay of the 1953 Central Gippsland Football League Grand Final. Still playing quite brilliant football, Doug also won Morwell’s Best and Fairest award, but couldn’t be talked out of hanging up his boots for the final time.

Sixty years later, on the Friday night of August 22, 2015, the Carlton team wore black armbands into the match against Port Adelaide at the Adelaide Oval - in honour of the memory of Doug Williams, who had passed away a few days beforehand at the age of 90.

Williams was recruited by Carlton on the recommendation of Bert Downs – brother of former Blues rover Tommy Downs.