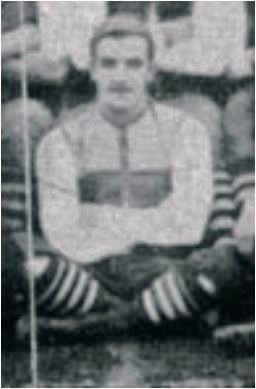 1890 April 12
Named in squad to play Britannia at Princes Oval.

1890 May 03
Named in squad to play in the first round of 1890 Premiership season against Melbourne at the M.C.G.

1890 May 17
Murray named in Carlton squad to play Port Melbourne at the M.C.G.

Murray played in other games this year, see 1890.

1935 April 13
Dan/Don Murray is recalled in an article in the Leader (p20) about the death of Dan Hutchison, former Carlton captain.
In 1887 Carlton were playing lowly placed South Williamstown and Carlton strong man George Cook came up against Don Murray in a contest for the ball. George was sent sprawling to the turf, much to his surprise. This was in an end of season charity match on October 01. South Williamstown beat the premiers Carlton on that day.

1954 September 07
Donald Hugh Murray passed away aged 90 years at his home in Williamstown.
He played for both the South Williamstown and Carlton Football Clubs.
Murray was also cricketer, and in 1892 he played in a Williamstown eleven that played England, which was captained by the famous W. G. Grace.
Don had been a member of the Williamstown cricket club since 1885 and at his time of death was it's oldest member.
He was also part of the St. Andrew's Church choir for 70 years and trained children in their singing for 50 years.
Don had worked all his adult life at the Newport Railway Workshops as an engine fitter.