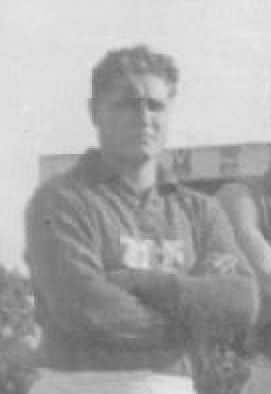 Throughout the decades after World War II, the football press used to be filled with stories of the “March Champions” – country recruits at each VFL club who were making a big impression in the weeks before the football season began. Invariably, these future stars could “kick a bag of spuds over a wheat silo”, or “flick off a light switch, and jump into bed before the room was dark.” Sadly, such hype was rarely justified, and most of those who showed real potential early often succumbed to home-sickness within a few short weeks.

One such recruit for the Blues was Des Lyons, from Barellan in the Riverina in southern NSW. A powerfully-built 183 cm forward, he had strong hands, good endurance and a booming kick. In 1955, at the age of 16, he had briefly trained with Collingwood, but soon missed the open spaces and went back home. Over the next five seasons, Lyons played senior football with both Barellan and Leeton, where his talent was obvious, and attracted an offer of another crack at first grade football with Carlton.

Des agreed to terms, and bypassed the Reserves to make an immediate senior debut for the Blues against Richmond in the first round of the 1960 season at Princes Park. Wearing guernsey number 20 at centre half-forward, he took some time to adjust, while Richmond held sway and were travelling like winners at the last break with a handy lead of 28 points. The Blues found some extra energy in the last quarter however, and surged back into contention, with Lyons providing a reliable marking target. Carlton kicked 4.5 in a dominant last term – including a long bomb from Des that split the big sticks. Richmond were held to a solitary point for the quarter, and Carlton snatched a nail-biting draw.

Injury kept Lyons out of round 2, but he was back in action on a cold and wet afternoon at the Junction Oval in round 3, when the home side had six more scoring shots than the Blues, only to lose by four points. Shortly afterwards, Des told Carlton that he would not be continuing on. The lure of a family business, along with the comfort of a close-knit community was too strong, and it drew Des home to the bush once more.

Over the next nine seasons, Lyons forged a superb career in Riverina football with Leeton, winning three Premierships, two League Best and Fairests, two club Best and Fairests and the South West District League’s top goal-kicker award in 1967. He represented the SWDFL on 20 occasions, and more than 50 years later, is still regarded as one of the Riverina’s all-time greats.

The Age said of Lyon's debut;
"Des Lyons played brilliantly in the first half to be the focal point of the Blues' attack. He was quiet later but splendid marking and accurate kicking made him a constant danger."