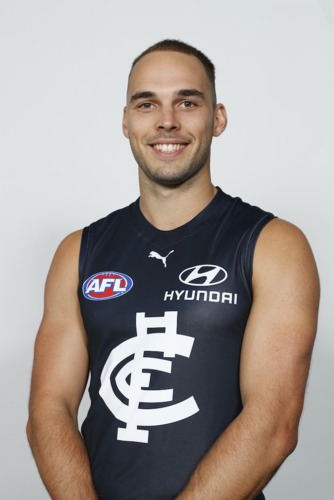 Another in a long list of VFL/AFL draftees nurtured at Melbourne Grammar School, David Cuningham joined the Oakleigh Chargers and represented Vic Metro in the 2015 National Under-18 Championships before he was recruited by Carlton at selection 23 in that year’s AFL National Draft.

A close friend of fellow Blues recruit Jack Silvagni, Cuningham is a genuinely quick midfielder with excellent foot skills. His idol growing up was Chris Judd, but David was thrilled to accept the number 28 jumper previously worn by some of Carlton’s greats, including “Percy”Jones, Fred Davies and Jack Wrout.

A persistent hip injury held David back during the early stages of his first season at Princes Park, and he wasn’t able to start stringing VFL games together until late July. When he did however, his ability stood out and he was selected for his senior debut against the Brisbane Lions at the Gabba in round 21. Although the Blues were narrowly beaten, David’s potential was obvious, and he was retained in the team for the last two matches of the year.

In his second year at the club Cunningham didn't get his first call-up to the senior side until round 9 of the 2017 season, but after 4 solid games that included 2 bags of 2 goals he was rewarded with the Rising Star Nomination after the Blues thrilling one point win against the GWS Giants. Carlton youngster David Cuningham has been named the Round 12, 2017 NAB AFL Rising Star nominee. The speedy midfielder was rewarded for his role in the Blues' thrilling one-point win over GWS at Etihad Stadium on Sunday. In just his sixth senior game, the 20-year-old impressed in a winning side, gathering 19 possessions and kicking two goals. He becomes Carlton's third Rising Star nominee this season, joining teammates Caleb Marchbank and Samo Petrevksi-Seton.

Unfortunately another injury affected year followed in 2018, despite a massive need for emerging midfield talent through the list. 3 games early in the year gave him an opportunity but the MC felt he'd missed out by the Round 4 debacle at the hands of North, before 2 games mid season again gave him the opportunity. Shortly after a torn hamstring saw him out for the year. 16 games in, and so much promise but a lot to prove...

Season 2020 was our COVID season, but Cuningham's BOG against Essendon was a standout for the Club as we again missed finals. Mid 2021 David would do his knee at the G, and with some post injury injuries he would not play at all in 2022. A 1 year contract extension for Cuningham in to 2023 would give him the chance to crack the 50 games!