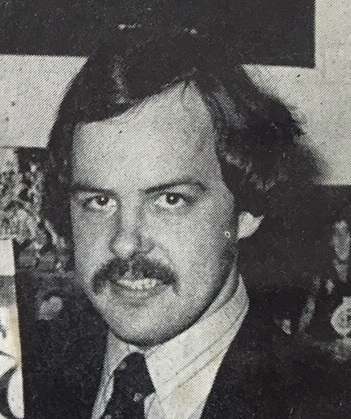 David Allen
Secretary of Carlton Football Club from 1977 to 1979.


David Allen made application for the position of Assistant to the Secretary of Carlton in early 1976 and was interviewed by then Club Secretary, Allen Cowie. Having worked at the VFL for seven years at both Harrison House in Spring Street and then VFL House in Jolimont, David had built a strong resume as he advanced from Office Junior in 1969 to Assistant Finance Manager and Assistant Manager at VFL Park by the time he left the VFL at the end of 1975.

With a strong package of written references from VFL luminaries including Eric McCutchan and Jack Hamilton, David was keen to present these to Allen Cowie at his interview at Princes Park. Mr Cowie’s response as he declined the offer was “Don’t worry, I’ve never read a bad reference yet – but I have done my own research”.

Between the telephone call from Allen Cowie offering him the position and the commencement date in early April, 1976, Allen Cowie unfortunately died, leaving a massive hole in experience in the Princes Park offices when David commenced.

“We were a very small team at that stage” said David. “In fact, our entire admin team consisted of Keith and me, Promotions Officer Keith Mills, Marketing Manager Jim Quinn, and Anne McLeod and Trudy Anrep in the office – that was the entire full-time administration of the Carlton Football Club”.

In early 1977, long serving Secretary of the Richmond Football Club, Alan Schwab left the Tigers for a senior position at the VFL. Alan and David had established a good working relationship over many years and it wasn’t long before legendary godfather of the Tigers, Graeme Richmond, invited David to the upstairs level of his Vaucluse Hotel for a meeting with him and other senior Richmond officials. David was immediately offered the position of Secretary at Richmond, but didn’t immediately accept the position.

“Carlton had been so good to me in my first year” said David, “and I would have felt very guilty just resigning to Keith and Ivan Rohrt after all the support and encouragement they had given me.

“So I sat down and told them the full story to date. Ivan was calm and told me there was a Club Committee meeting that night, and could I leave it with him and not attend the meeting”.

The next day, Ivan was at the club early and along with Keith, advised David that the Committee had decided on a change of administration positions and responsibilities and that Keith McKenzie would assume the overall position of General Manager and that David was to be offered the position of Club Secretary – with new roles for each person.

David gladly accepted this offer and advised Richmond that he would not be joining the Tigers.

Over the next three years, a number of major changes occurred at Princes Park which had a flow on effect to the small administration team.
Firstly, Ian Thorgood, who was appointed coach at the start of the 1976 season following the sudden resignation of John Nicholls, was not reappointed at the end of 1977 and steps had commenced to find a replacement.

Meanwhile, the Club had missed the finals in ‘77, and the Committee was being challenged in all major positions. The challenging group consisted of former President, George Harris, past Carlton heroes Sergio Silvagni and Kevin Hall and businessman John Minuzzo. The Harris group was successfully swept to power at the 1977 Annual General Meeting, and so began the start of a new regime at Princes Park.

From the outset, George Harris made it clear that if he was to accept the nomination for Club President, he would need to defer a number of his business interests and would therefore require to be paid by the club for his services.

“I really wondered how the rest of the Committee would feel about this” said David, “but I should have known George better – he had done his homework and the Committee endorsed this requirement without discussion”.

Harris immediately set himself to work and quickly established his office in the former President’s (entertainment) Room. He would attend almost every day during the week and played a major role in the day to day activities of the Club.

A senior coach was needed and George immediately went to work contacting a number of likely candidates before securing 1977 South Melbourne coach, Ian Stewart for the position in early 1978.

Stewart unfortunately resigned after only a few games in 1978 due to illness and it was left to a reluctant Reserves Coach, Sergio Silvagni to temporarily take over the senior role.

“I remember a Match Committee meeting held during this time when Chairman, Wes Lofts basically put it on Serge to take the Senior job permanently” said David, “and Serge’s reaction was to just say ‘no, I’m not doing it’ and walk out of the meeting.
“So Wes, Keith McKenzie and I walked back from the Carlton Social Club to the football office and sat down together for a review. Out of that chat came the thought – what about asking Jessa if he’s interested?”

The rest is history as Alex Jesaulenko took over the senior role as Captain-Coach and the results turned around significantly with the Blues winning the flag in 1979.

The joy of on-field success did not resonate to the Board Room unfortunately as friction and division broke out over George Harris’ ideas to lead the club into revenue streams outside of football. These projects included a marketing division, a sports medicine centre and some real estate developments.

“It became a really hard place to work” said David, “because although the full Committee reviewed and accepted all of George’s ideas, a few turned on him when the projects didn’t provide instant success. As they pushed and prodded George further, he got his back up and would not answer their questions. Not because of arrogance, but because he was bitterly annoyed at their impatience”.
It was around this time that George was contacted by a journalist from the Insight team from the Melbourne Age, asking if he could come to the club to interview him.

“I remember this clearly because I was sitting in my office when George buzzed me and Keith McKenzie the next day asking if we could come to his room” said David. “Within minutes, two journalists from The Age arrived and coffees were ordered and delivered. The first journalist told George he wanted to ask some questions about Carlton’s business ventures, and every question they asked, George would respond with ‘no comment’. They finally saw they were wasting their time and left – with five cups of coffee still sitting untouched.”

Not long after, The Age Insight team ran multiple stories about Carlton’s adventures into the business world and clearly lined George Harris up as the scapegoat for lack of immediate success.

“In the end, I had had enough and told George I was resigning. He asked me to hold off in announcing it as he told me he was thinking the same for himself, and that we should wait until the timing was right. I had to go into hospital for a knee operation, and everything exploded at the Club’s Annual General Meeting towards the end of 1979.”

The rest of the story has been covered in other sections of the Blueseum, so David chose not to repeat them here.
“Suffice to say, I loved working at Carlton” said David. “Who else would have visits to their office for chats by such names as Alex Jesaulenko, Ian Thorogood, Ian Stewart, Bruce Doull and Ken Sheldon? – I loved it!”

After leaving Carlton and riding through the wave of the big meeting at Festival Hall in early 1980, where David was one of three speakers to address the audience on behalf of the George Harris team, David received an interesting phone call.

“It was from Graham Sherry, a Vice President at Footscray Football Club and he asked me if I was interested in having a chat.”

That chat resulted in David being appointed General Manager at Footscray and he remained there for two years before leaving football after a total of 13 years to devote more time to his young family.

In his time at the Bulldogs, David had signed up a number of successful players including Simon Beasley, Stephen and Rod MacPherson, Brian Royal, Michael McLean and Stephen Wallis.

After a small hiatus, David found himself in the world of golf administration and over the next 30 years, occupied positions including General Manager at Kingston Heath, Kingswood and Latrobe Golf Clubs and also served 12 years as Executive Director of the NSW Golf Association (the largest State amateur golf body in Australia). He later became the inaugural Executive Officer of Golf Management Australia, before retiring in 2016.
“Don’t get me wrong” said David, “I really enjoyed all my time in golf administration. But for the sheer joy and emotional rush, running on to the MCG when the siren went in 1979, with the Blues beating Collingwood by five points, that is an experience you cannot buy!”