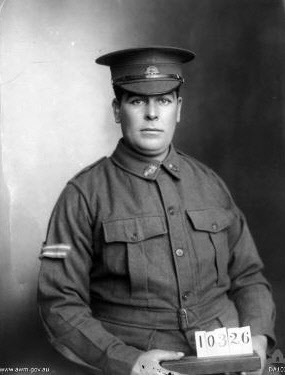 The twin brother of Carlton Premiership full-back Doug Gillespie, David Gillespie was a burly forward whose football career at Carlton was cut short by injury. He then crossed to VFA club Brunswick, where he forged a fine career, and later, joined thousands of other young Australians in volunteering for active service in the ‘War to end all Wars.’ Nine months after being horrendously wounded by shellfire in France and invalided home, Dave died of peritonitis at Caulfield Military Hospital.

David and Doug Gillespie were born twelve days before Christmas, 1887, into a large family living in the grounds of the Melbourne Zoological Gardens at Royal Park. Their mother Mary ran the kiosk, while their father James was employed as a gardener. With their three brothers and three sisters, they had a happy but austere childhood, until their father died while the twins were attending Princes Hill Primary School. Their devoted mother - with the help of various relatives and friends – somehow kept her family intact through her grief.

At school, the twins showed a precocious talent for football, which explains the later revelation that the Gillespie twins were distant cousins of Hawthorn legend, Michael Tuck. One afternoon in 1906, Doug was at Princes Park watching Carlton’s senior team training, when he retrieved a ball that had been kicked over the boundary, and punted it back out onto the oval. Watching on, Blues’ coach Jack Worrall was impressed by Doug’s technique and asked him to join in. Within weeks, Doug Gillespie was on the way to fame as Carlton’s first VFL Premiership full-back.

No doubt prompted by both his brother and Worrall, Dave Gillespie turned up for training with the Blues in 1907. Taller and heavier than his brother, Dave was a robust, hard-hitting type, not as quick as his twin, but a fine team-man and a natural leader by example. In May 1907, Dave joined Doug in the Carlton seniors for his debut match against Fitzroy at Princes Park.

Playing in the ruck and resting forward, Dave, Doug and their team handed out a 52-point hiding to Fitzroy. A week later however, the Blues were given a reality check when South Melbourne beat us by 15 points, and Dave left the field with a broken collarbone that ended his season before it really got going.

After only three more senior appearances for the Blues, Dave Gillespie decided that his life journey would take a different path. He crossed to the VFA to continue his football career with Brunswick, and in 1909 joined the Victorian Police Force. At Carlton, he had been earmarked as a forward, but the VFA Magpies saw him as a centre half-back. The big bloke settled into a long career at Brunswick, leading the defence in their 1909 Premiership triumph over Prahran.

When simmering international tensions boiled over into Great Britain’s declaration of war against Germany in August 1914, 27 year-old Constable Dave Gillespie was an early volunteer for front line military service. Following basic training, he joined the soon-to-be famous 59th Battalion, and sailed for the disastrous Gallipoli campaign. He survived his baptism of fire, and in March 1916 was promoted to the rank of Sergeant, as his battalion was pitched into the horrors of trench warfare on France’s Western Front.

By May, Dave’s outstanding leadership qualities saw him promoted again, to Company Sergeant-Major, as the 59th Battalion began a series of actions that would win it a reputation as one of the finest allied formations of the war. On July 19, 1916, Dave was leading his men in an assault on German positions near Armentieres when an artillery shell exploded close behind him.

Shrapnel tore into his lower back and one arm, inflicting grievous injuries. Miraculously still alive, he was evacuated to a hospital behind the lines and quickly repatriated to England. A series of operations followed, but it was obvious that Dave’s spinal cord had been shattered, and his stomach and intestines were irreparably damaged.

Dave arrived back in Australia aboard a hospital ship on New Year’s Eve – January 31, 1916, and was sent to Caulfield Military Hospital for ongoing care. Tragically, despite the best efforts of the staff and doctors, peritonitis set in, and another of Australia’s finest passed away on March 27, 1917.

Carlton and Brunswick Football Clubs were both well represented when Dave was laid to rest with full military honours at Coburg cemetery, and both clubs wore black armbands in tribute at their next match. For Dave’s grieving mother, her only consolation was that while all five of her sons served in the armed forces, four survived and came home to her.

Articles: The Blues at War | Remembering the Gillespie Twins