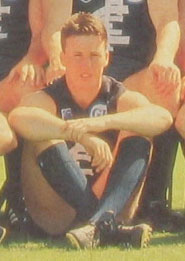 Darren Walsh was the son of former Blue Brian Walsh, he played for Carlton reserves in 1993 for 18 games and 8 goals and later played for Melbourne in 1998, Geelong reserves in 1999 and captained Bendigo Diggers in the VFL (old VFA). Walsh had originally played with the Golden Square FC and Catholic College Bendigo

He was selected by the Blues in the 1992 National Draft as a Father-Son pick.

In 2002, Darren would be an assistant coach to his father Brian who was coaching Bendigo team Golden Square.