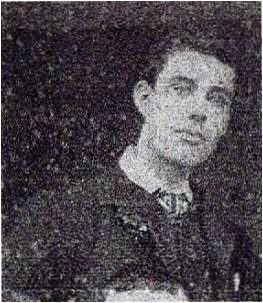 
Left; Charles Edwin Letcher is pictured in the Carlton Football Club team photo in Tasmania in 1888.

C. Letcher was named in the 24 man team squad to play Sandhurst (Bendigo) at Bendigo on June 26 1886
Blueseum believes Letcher made his debut for the Blues in the July 03 1886 match against St.Kilda at St.Kilda.

Charlie seems to have played only the one season playing 7 or possibly 10 games.. The next mention of him is in 1888 when he is among the touring team to Tasmania where he acted as a goal umpire. Perhaps injury prevented him continuing his football career, but he became involved in the administration of the club being on the committee in 1890.

1891 June 13
C. Letcher was named in an "Old Players" Carlton team squad to play a charity match on the MCG against a Geelong side.

"As a matter of fact, Charlie Letcher appeared to take a greater interest in football than cricket. He was a member of the Carlton football committee, when Jigger Moorhouse, Wally McKechnie, Strickland, Lorraine, Danny Hutchison, Sutton, and other Dark Blue stars were idols up Carlton way, and it was thought to be due to the influence of George Robertson, the old time football captain, that Letcher left East Melbourne for Carlton, as old George, Billy Donaldson, Carlton's football secretary, and Charlie Letcher were inseparable companions."

.* Reported in the Sunday Times (Perth) October 15 p9s 1916 under Hospital Deaths for the week ending October 12, that a Charles Letcher aged 48 died in the Perth Public Hospital.