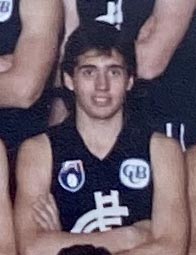 Cameron James was recruited from Morwell in the 1990 National Draft, he was selected at pick 59, this was Carlton's fourth pick of the draft. He was noted as being a tall marking forward. In 1992, James represented Victoria at U/18's level (refer to picture on the right).

Inside Football Post Draft Profile
Moving to Melbourne next year and is another tall forward.