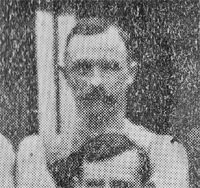 Debuting in 1899 McNamara played 69 games and kicked 8 goals. He was born in Belfast (Port Fairy), and recruited to Carlton from Brunswick.

"Surrounded by his 11 grandchildren and 10 great grandchildren, Mr. Bill McNamara celebrated his 80th. birthday at the Reservoir home of his son, Patrick, last night.
Mr. McNamara, who was captain of the Carlton team in 1902, was not one to whit disappointment over Carlton's one point defeat on Saturday.
'The better side won on the day,' he said, but he still thinks Carlton a grand team and never misses one of their matches.
'Still, today's boys don't play the game as hard as we did.' 'It's a bit like the game of tigggy now. They're inclind to tig rather than dump their opponent,' he chuckled.
In 1902, Mr. McNamara represented Victoria in the interstate team. He retired in 1904 and umpired for the following 10 years. He was also a committee member for several years." (Argus June 11 p8)