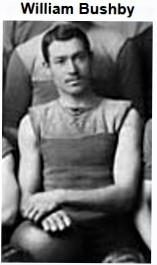 1886 April 24
Bushby was named in the 23 man squad to play a Brunswick 23 at Princes Oval.
Carlton won 2-0.
The report says that this was the first time Brunswick had played.

1886 June 06 Friday
The North Melbourne Advertiser says, "Bushby, a new man Carlton got from Ballarat at the beginning of the season, did not suit the Carlton Committee. The South (South Melbourne) have got him now, and think a lot of him, he goes into their team shortly."