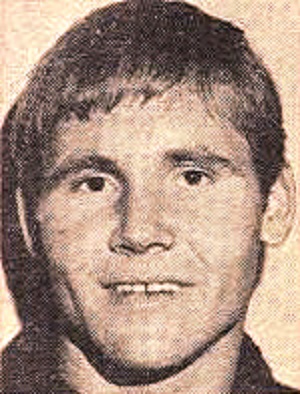 A fortunate footballer who was in the right place at the right time, David William (Bill) Bennett played at centre half-forward in Carlton’s 1968 Premiership team in just his 11th VFL game. Although he was still not yet 21, he left Princes Park shortly afterward, and never pulled on the Navy Blue guernsey again.

Originally from Maffra, Bennett caught the attention of former Carlton captain Graham Donaldson who played a big role in recruiting for the Blues in the Gippsland region during the early 1960s. Donaldson liked the look of the agile teenager with real football smarts, but getting him to Carlton proved no easy task. Bill was a country boy, apparently bereft of any burning ambition to be a League star, and it took a lot of talking by Donaldson before Bennett eventually agreed to come to Princes Park in 1966 and use up the four match permits that had been negotiated with his club. At Carlton he was greeted by the Blues’ controversial new coach Ron Barassi, and issued with the number 13 guernsey as worn by Donaldson throughout his 106-game career.

Less than three weeks after his 18th birthday, Bennett played his first senior match as 19th man against St Kilda at Moorabbin in round 2, 1966, and was on the end of a 53-point hiding. Moved to full-forward the following week against Fitzroy, he kicked his first career goal in a 32-point comeback win, and followed up with another four goals when the Blues smashed Essendon by 61 points in round 4. His hard leading and quick thinking in that game impressed Barassi , who pencilled Bennett in as the team’s future spearhead – if the club could convince him to stay.

Bennett’s fourth and last match for the year was another effortless victory over Melbourne on the next Saturday afternoon. Then, having used up all his permits, he was back in Maffra by mid-year. After that, it took more than twelve months for Barassi and Donaldson to cajole Bill into having another crack with a Carlton side that was looking a definite contender for the ’68 flag. By then, the dynamics within the team had changed, and the emergence of Brian Kekovich at full-forward had straightened up Carlton’s game plan. So when Bennett returned to the senior side against St Kilda in round 10, 1968 he was wearing guernsey number 12 and playing on a half-forward flank. But he was obviously underdone, so he was sent back to the Reserves to find form before being recalled for round 16 against Footscray at the Western Oval. Although Carlton lost by five goals in a shock result, Bennett showed flashes of his best and kicked two clever majors. 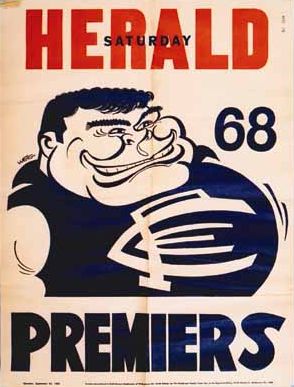 By round 19 – the second-last of the home and away matches – Carlton was clinging to fourth spot on the ladder behind Essendon, Geelong and St Kilda when they hosted Fitzroy at Princes Park. Barassi sent Bennett to centre half-forward, and the Blues attack found real cohesion to pummel the visitors by 52 points. Another win over North Melbourne in round 20 lifted the resurgent Blues to second, and set up a much-anticipated Semi Final clash against minor premiers Essendon.

Playing just his tenth senior match in front of more than 100,000 fans at the MCG on the following Saturday afternoon, Bennett started at centre half-forward, but went down with a serious ankle injury in the second term and was replaced at half-time by Neil Chandler. In a pivotal move, Barassi shifted Robert Walls into attack after the long break, and the resolute Blues drew away to win by six goals.

Bennett was cleared of structural damage to his ankle in the days following, although he was still in doubt for the Grand Final right up until selection night. Meanwhile, Essendon vanquished Geelong in the Preliminary Final and qualified to meet the heavily-favoured Blues in the flag decider. Another enormous, record-breaking crowd of almost 117,000 packed into the MCG to see a tense, dour struggle ruined as a spectacle by a strong cross-wind, but the closeness of the scores kept fans on the edges of their seats throughout.

Carlton clung to an 11-point lead at three-quarter time, and withstood a spirited surge by the Bombers to win the club’s first flag for 21 years – with Bennett watching on from the boundary. Bill’s suspect ankle collapsed on him during the hectic last term, and Neil Chandler came on again to take three timely marks that helped get the Blues home in a hectic finish.

For various reasons, three members of the ’68 Premiership side retired in the days and weeks after the prolonged celebrations; Peter McLean, Brian Kekovich and Bill Bennett. In Bill’s case, he headed home to Maffra, from where he continued to play and coach in various country leagues for more than a decade.

In 1977 he was in Darwin, playing for St Mary’s in the NTFL when he was voted the joint winner of the competition’s Best and Fairest award; the Nicholls Medal, in a tie with Mark Motlop (Nightcliff) and Ian Wallace (North Darwin). He later crossed to Nightcliff, and coached them from 1981 to ’83.

Bill Bennett coaches West FC
As has earlier been indicated, the present site of the Gillen Club became Wests in the mid- 1970’s. In 1978, with Rod Rose as President, the committee decided that, to be truly successful, a top playing coach, who could attract other good players, was required. As this was going to need considerable money, Rod commenced a very successful bingo night at Wests club, with all players rostered to assist. “Bustling” Bill Bennett, a member of Carlton’s victorious 1970 grand final, then a champion for South Adelaide and a Darwin player, was duly appointed. He is remembered most for his ferocious training for fitness, and his demand for skills. All people associated with Wests at that time recall such as his first night’s training ending with 10 laps of the oval, and then later training nights requiring 5 repeats of runs up and down Tank Hill; the training camp out at Glen Helen when players had to carry sizeable rocks above their heads for 2km; another run from the Westies Club to Heavitree Gap, followed by sprints in the sand, a run up the Todd to Anzac Hill, 3 runs up and down the hill, and a long run through the railway yards back to the Nadich home; and as a final illustration at the start of the 1980 season, a series of exercises at Westies oval followed by a run out through Heavitree Gap, along the dump road, then up the hill to the towers. After a recovery of about 5 minutes, the exercises commenced again, we had to run down the hill and then, at Heavitree Gap, commenced sprinting to the front of the line of players, back to the Westies oval. Wests burst out of the blocks that year, and with Bill rucking non- stop, and no one taking a backward step, won their first game against a shell-shocked Federals by 13 goals, their first-ever game after 8 seasons against a very good Rovers team, and all games until the grand final. Players like Leo “Choco” Nadich and Rob Floreani flourished; Adam and Giana Nadich (Choco’s parents) became life-long Wests supporters; and Adam’s brother-in-law Enzo Floreani went on to coach Wests B grade to their first-ever premiership. Unfortunately two key players were reported in the preliminary A grade final so that Rovers, under astute coach Phil O’Brien, a former Hawthorn player, were successful in a very close grand final. It was a big disappointment, but the next year Bill took Wests to their first ever A Grade Premiership over Pioneers. This was an absolute thriller of a game, with both sides no more than a goal or two in front at any stage, John Green (a decathlete and former S.A. F.L. player) at centre half-forward best-on-ground, and Robbie Goodwin (a former South Adelaide player) dominating his wing. With about one minute to go, Robbie kicked to Bill, who marked on the siren then kicked truly for the victory. The celebrations continued until Tuesday night of the next week!