Ex-Swan recruit robbed of a flag at Carlton. 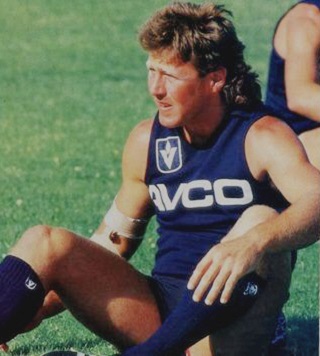 In the wake of Carlton’s loss to North Melbourne in the 1985 Elimination Final – the Navy Blues’ fourth successive finals defeat since 1982 – the club embarked on a determined recruiting drive that brought a number of high-profile recruits to Princes Park. One of the prized signings was former Sydney Swans Best and Fairest Bernie Evans, who was to be desperately unlucky not to play in the 1987 Premiership team.

A talented rover and a dangerous forward pocket, Evans had grown up in the South Melbourne area and won a VFA Premiership with Port Melbourne while still a teenager. In 1978 he was recruited by the Swans, and over the next eight seasons - during which the South Melbourne Football Club was transplanted to Sydney – Bernie remained one of the Southerners’ most consistent and popular players.

In 1981, after a somewhat bitter separation, the South Melbourne Football Club became the Sydney Swans. At first, the club was happy for Evans to live and train in Melbourne, where he was intent on maintaining his full-time job as a clerk on the Port Melbourne wharves. Each fortnight, Bernie flew to the Harbour City for home games, and the arrangement seemed to work well - especially when he won the Swans’ Best and Fairest in 1984, and started the following season in sensational fashion by kicking nine goals in the opening round against St Kilda.

However, when Tom Hafey was appointed senior coach of the Swans after their dismal season in 1985, he decreed that all of his players had to live and train together in Sydney. By coincidence, Evans had insisted on including a number of conditions in his contract – including the right to stay at home in Melbourne - and when he and the Swans hierarchy could not reach agreement, the news soon spread. Carlton was only one of a number of Melbourne-based clubs that offered Bernie a new home, before he eventually agreed to join his former Swans team-mate David Rhys-Jones at Princes Park.

By early the following year, Carlton’s recruiting net had captured the likes of Stephen Kernahan, Craig Bradley, Peter Motley, Jon Dorotich and Evans among others. Some of the Blues’ mainstays of the early eighties – players like Ashman, Sheldon, Buckley and Marcou - were too often suffering from poor form and injuries, so Evans was seen as a welcome injection of experience and hunger to perform in finals. Allocated guernsey number 15 (previously worn by another high-profile import in Val Perovic), Bernie enjoyed a solid pre-season and played his first game for his new club in the opening round of 1986 against Hawthorn at VFL Park, Waverley. The Hawks never let Carlton into the match and won by six goals that afternoon, with the defeat made even more costly when Evans and Mil Hanna both suffered long-term injuries. Hanna wrecked a knee in the first minute of the game, while Evans finished the match with a broken thumb that cost him nine weeks on the sidelines.

When he eventually returned to Carlton’s senior team in round 10, Bernie celebrated his 150th career game in emphatic fashion when the confident Blues destroyed Melbourne by a mammoth 116 points at the MCG. Three weeks later he starred by kicking five goals in a big victory over Richmond at Waverley, and in early September his switch of clubs paid off when he experienced the joy of victory in his first-ever final when the Blues beat Sydney in a Qualifying Final at the MCG.

Evans’ five-goal haul on the following weekend against Hawthorn in the second Semi Final helped propel the Blues into Premiership favouritism, but the Hawks shocked the competition and knocked over their cocky rivals by seven goals on Grand Final day to snatch the flag. The Blues were beaten by Hawthorn’s cohesion, and brushed aside by their aggression. Like all but a few of his team-mates, Bernie had a disastrous match and was hardly sighted.

However, once the raw emotion of that defeat had subsided, the determination to atone was a powerful motivation for everyone at Carlton. The Blues dominated the 1987 season to finish four points clear of Hawthorn on top of the ladder after the home and away rounds, and in a carbon copy of the previous year, met Hawthorn in the second Semi Final. The Blues won again, but to the dismay of Evans and the club, he was reported by a field umpire for striking Hawthorn ruckman Greg Dear.

“It was only a glancing blow,” Evans later recalled. “And Dear even told the Tribunal that he milked the situation to get a free kick. Missing out on playing in a Premiership side was a real kick in the guts.” Indeed, Bernie’s devastation on Grand Final day can only be imagined, as he watched the Blues destroy the Hawks by 33 points. The club rallied around Evans and ensured that he was included in all the celebrations, but the emptiness of that missed opportunity never really subsided.

Although Bernie played on into 1988, he found it hard to reach peak form until the latter part of the season. Even so, when the Blues made the finals for the eleventh year in a row, Evans was recalled to experience the thrill of finals football once again in a big Qualifying Final win over Collingwood. His last game came the following week in yet another Semi Final loss to Hawthorn, and his career ended on a positive note when he was voted Reserves Best and Fairest.

After leaving Princes Park, Bernie’s only later involvement in football was as an assistant to Tom Alvin when his former Carlton teammate coached VFA (now VFL) club Sandringham for a couple of seasons. Later, he ran a contract cleaning business and was a partner in the Cricketers’ Arms Hotel in his old stamping ground in Port Melbourne.