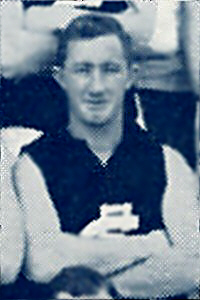 The second individual with the surname Schmidt to play at senior level for Carlton, Barry Leslie Schmidt wore guernsey number 34 in four matches for the Navy Blues in 1965. A local product who started his football career with the Carlton Youth Foundation and Collingwood Technical School, Barry joined Carlton’s Under-19 team in 1962. The following year he was promoted to the Reserves, where he became the team’s regular back pocket and was voted Best and Fairest.

After another full season with the seconds, Schmidt was chosen for his first senior match as one of Carlton’s two reserves against Geelong at Kardinia Park in round 13, 1965. He wasn’t called on until late in the match, but Carlton won by almost five goals in the only victory of his senior career.

Schmidt sat on the bench again twice more in defeats by South Melbourne and Collingwood, before he was eventually given the opportunity to start a game on the ground when Carlton met Richmond at the MCG in round 17. Playing on the last line alongside Wes Lofts and Brian Buckley, he gathered 11 possessions and two marks under relentless pressure, as the Tigers won by 23 points.

Shortly afterwards however, following Carlton’s last game of the season, Schmidt was one of a number of players who were informed that their services were no longer required.

The first Schmidt at Carlton was Paul Schmidt, a brilliant small forward for the Blues prior to, and during World War II. In 78 games, he kicked 228 goals (including 11 in one match) and was a member of the Blues’ 1938 Premiership team.