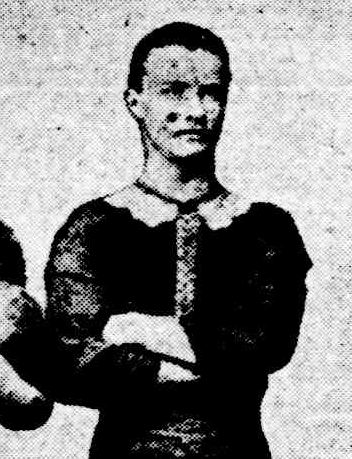 Bernard "Barney" Murphy completed his education at Xavier College, worked in the Victorian Civil Service, and later was an accountant for the Carlton Brewery. Barney was a follower and also played half back for the Blues and he had many other sporting interests (read obituary).
He passed away in Perth (Jan 1924) after residing in the West for the past 26 years.

1876 His first season under the Dark Blue; has some excellent qualities, holds a trifle, but marks, dodges,and kicks well, is never bustled when playing forward.
(The Footballer 1876 p34)

1877 An excellent all round player, light, but full of vigor, a splendid change follower, sometimes over-anxious when too far forward.
(The Footballer 1877. p35)

1878 Has played up wonderfully well as a follower, although deficient in weight, a most reliable good-tempered player.
(The Footballer 1878. p31)

1879 One of the most effective players the club boasts, and although not a tip top kick, plays a wonderful game - especially following.
(The Footballer 1879. p29)

1882 April 29
The Australasian in reporting new players for the year, mentions that B. Murphy has returned and may play for ther Blues.

1883 September 01
B. Murphy umpired the Carlton-South Melbourne game at Princes Oval.
The Record, Emerald Hill 14 September, said;
"Mr. Bernard Murphy, once very popular as a first-class player and now equally so as one of those who do not take an active part in the game, was the central umpire, and a most efficient one he proved." 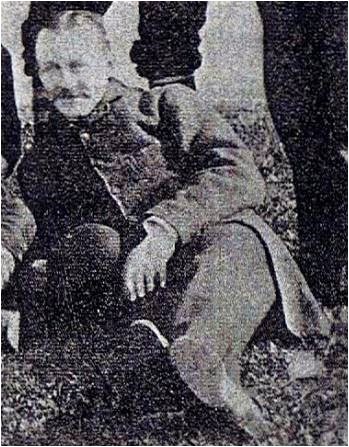 Above; Barney Murphy in the 1884 Carlton Football Club Team photo against Adelaide.

1893 B. Murphy had the job of organising a Carlton team of former players to take on a similar Melbourne team on the M.C.G. in August.
See July 22 1893

After War was declared in 1914 Barney like many other Australians presented himself at the enlistment office, and he was passed as medically fit. But Barney was refused entry into the military because of a technicality, he would have been around 60 years old!

1915 September 26
The Sunday Times (Perth) says a veterans carnival will take place next Saturday October 2.
Four teams of "has beens" will take part and Barney Murphy will captain the Victorian team.
The other teams will be the old Perthites, Fremantle, and the Rest of Australia.

1919 September 19
The West Australian newspaper published a list of old footballers taking part in an Old Time Carnival in Perth.
Two teams were to play the Victorians and the Rest of Australia.
B. Murphy, C. Coulson, and A. Gellatly were named in the "old" Victorian team.

1924 January 28 Monday
Barney Murphy passed away in Perth on the 11th January aged 70 years.
The Daily News in Perth ran a lengthy obituary detailing his many sporting achievements,


THE LATE BARNEY MURPHY - AN OLD FOOTBALLER AND ATHLETE

Barney (Bernard) Murphy died 11 January 1924 aged 69.
He is buried at the Karrakatta Cemetery Perth (Roman Catholic Section EA plot 0016)
Unfortunately in August 2016 this writer on a visit to the cemetery could not locate Barney's grave.