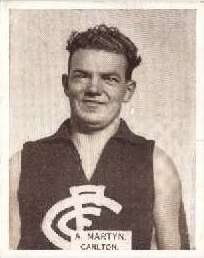 Brunswick born, Aubrey Martyn and his brother Colin rose to football prominence at VFA club Coburg during the Lions’ Premiership years of 1926-27. Colin was Coburg’s captain and match-winning centreman, while Aub was a capable defender at either half-back or full-back.

In 1928, as the Great Depression began spreading across the world, the lure of greater financial reward drew Colin Martyn to Carlton. Aub joined him a year later, and the pair played together in navy blue for four seasons, including the 1929 Preliminary Final loss to Richmond, and the hard-fought 1930 Semi Final defeat by Geelong.

After 1930 however, Aub’s form began to tail off, while his brother went on producing consistent, quality football. Colin was outstanding in Carlton’s 1931 finals campaign – a wearing series of matches that lasted all the way to the Preliminary Final. Largely because of his courage and consistency that September, Colin was appointed captain of the Blues for the following year.

When Colin made his debut as captain in round 1, 1932, Aub was included in the team in a back pocket. But after that, he managed only five more appearances over the season. The Blues had another impressive year and finished on top of the ladder, only to yet again fall to Richmond by 4 points in a cliff-hanger Grand Final.

Colin retired after that heart-breaking crash at the last hurdle, leaving Aub to soldier on for six more games until July of the next year. In round 14, 1933 at Corio Oval, Geelong handed Carlton a 73-point drubbing, and soon after that, Aub realised that his time was up. He saw out the season with the Blues, then went back to Coburg to finish off a creditable career.

During his 38 matches in the number 4 guernsey for Carlton, Aub rarely ventured further up field than the centre circle. Therefore, he never found himself within scoring distance, and indeed, never had the opportunity to take a shot on goal.

One of five members of the 1926 Coburg Premiership team who also played at Carlton (the others were Rowley Faust, Aub Charleston, Ernie Martin and Colin Martyn) Aub Martyn passed away on the 13th February, 1989, at the age of 82.