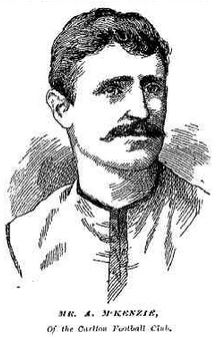 From junior club Coburg and Melbourne.

McKenzie was named as the best player amongst the 'Champions of the Colony' (The Argus) for 1889.
(Origins of Australian Football Vol.3 p438)

Originally the Blueseum had a single record for 2 players surnamed McKenzie over 1889-1890. It has been difficult to pull the information apart. This particular player record is listed as A. McKenzie but some of the references may be towards the other McKenzie. In particular, there are two players named McKenzie in the Carlton Team photo taken in Sydney in 1890.

The Blueseum now believes that there was only one McKenzie, ie; A. McKenzie.
Confusion arose with the 1890 Sydney photo that had two players with that surname.
We now think that this was a printing mistake, and the player on the front row, second from the right is in fact Wally McKechnie.
McKechnie's photo on his bio page and the Sydney photo are very similar.
A. McKenzie and Wally McKechnie sailed with the team, and both played in the matches in Sydney.

Saturday May 11 1889 Carlton played Melbourne on the M.C.G. Alex McKenzie had earlier announced that he would play with the winner of this game. The Blues easily won 5.7 - 1.1 and McKenzie duly crossed to Carlton. See demonwiki http://demonwiki.org/May+1889+match+vs+Carlton

McKenzie made a sensational debut for the Blues after crossing from Melbourne in 1889. On June 15 Carlton played North Melbourne at Arden Street, on the following Saturday The Australasian's report said;
"The best performer on the ground was McKenzie, concerning whom so much has been said and written during the past fortnight. I am not surprised, after having seen his play in this match, that the Carltonians went to so much trouble to obtain his clearance, for, unless he was above his usual form, he is undoubtedly one of the finest footballers in Victoria. I can't help feeling sorry for Melbourne, who so badly want men like him, have lost his services, but I also congratulate Carlton upon their having gained so valuable an accession. He followed on Saturday in superb style, and in a large measure, the winners were beholden to him for their success. His two goals were real good ones, and a mark he made just before half time has seldom been bettered on the football field. The ball was kicked past him, and was travelling at a good rate, when he, turning, gave chase, and with marvellous dexterity secured it before it reached the ground." (Australasian June 22 p26)

1895 The Fitzroy City Press, July 19, in it's report of the previous Saturday's match between Fitzroy and Melbourne mentions that Melbourne's "McKenzie, the old Carlton "Dukie" put in some good work..."
The Australasian July 20 1895 (p18) also mentions that McKenzie has returned to Melbourne. 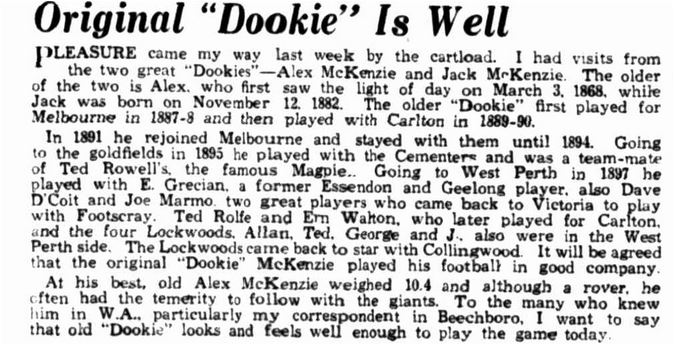 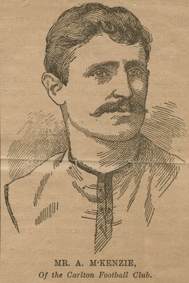 1927 vs Geelong in Sydney exhibition game