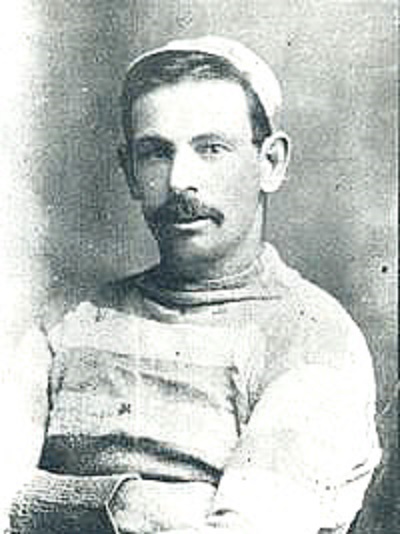 Albert Henry “Alby” Paterson packed a lot of living into his 44-year lifetime, before he became the 12th Carlton player to lose his life as a consequence of injuries suffered in World War 1. Officially recognised as the 24th player to represent the Old Dark Blues, Paterson had already played at least 17 VFA games for the club (and possibly as many as 50 or more) when he was selected in the centre against South Melbourne at the Lake Oval in round 2, 1897 for his one and only VFL game. The match ended in defeat for Carlton, although the Blues were encouraged by their spirited recovery from a 25-point deficit at three-quarter time to get within 4 points of the Bloods on the final bell. In June of that year Alby was cleared from Carlton to Montague football club.

Twenty-one years earlier, Paterson had been born in the tiny Mallee township of Happy Valley, south of Robinvale. Later, he relocated to Melbourne and was playing football for Ascot Vale when he was recruited by Carlton. However, midway through 1897, after at least four seasons at Princes Park (and that one VFL game) Alby abruptly left Carlton and joined the Montague club. Meanwhile, Australia was enduring an economic depression in all states except Western Australia, where a gold-mining boom was attracting thousands of individuals and families from the eastern states. That influx energised the existing Australian Football competitions, and began making the West a football powerhouse.

Sometime around the turn of the century, Paterson joined the exodus from Victoria to take a job in the mines, and became a star defender for the Mines Rovers club in the powerful Goldfields Football League. In 1904 he was selected in the WA state side, but didn’t play due to the recent tragic death of his only son. That same season, Collingwood Premiership full-forward Ted Rowell had returned home to WA and, after playing on Alby, marvelled at his high-marking skills and described him as “almost unbeatable.”

By 1916 Australia was heavily engaged in the war in Europe and all able-bodied men were being constantly urged to volunteer. Although he was already 40 years old, with a wife and three daughters, Alby enlisted on the last day of that year, and because of his experience, was allocated to the 3rd Australian Tunnelling Company. Less than 12 months later he was under fire on the Western Front, engaged in the dangerous and demanding work of placing mines under enemy lines, as well as the construction of deep dugouts, communication trenches and artillery emplacements.

In June 1918 – six months before the end of the war - Sapper Paterson was rushed to a casualty clearing station struggling for breath, apparently due to the inhalation of poison gas. He remained under hospital treatment for many months before he was repatriated home aboard a hospital ship in February 1919, but his health never recovered and he died, aged 45, in April of the following year.

A few days later, this obituary appeared in The Western Argus of Tuesday, April 20, 1920.

PROMINENT FOOTBALLER’S DEATH
THE LATE ALBERT PATTERSON (sic)
The death occurred on Saturday of Mr. Albert Henry Patterson, at his residence, Lane St., Trafalgar. Deceased was a noted footballer on the fields a score of years ago, and was a member of the first goldfields representative team that visited the metropolis in 1901, as well as a member of the first State team to play in the carnival games in Victoria in 1906. “Patty”, as he was familiarly known on the fields, was generally regarded as the finest exponent of the game as a back player in goldfields league football, his brilliant and safe high marking being quite features of the matches in which he took part in the early years of this century. On the field he was absolutely clean and fair to an opponent, and was undoubtedly one of the most popular players.
His remains were interred in the Methodist portion of the Kalgoorlie cemetery yesterday afternoon, when a large number of members of the Trafalgar Fire Brigade, mines Rovers Football Club, and National Labour party, of which deceased was a member, were present.

Most of the above information about Alby Paterson’s life and career remained unknown until his great nephew David Paterson contacted the club in January 2016. Throughout his life, and particularly during his football career, Alby’s name was often misspelt as Patterson and as a result his sacrifice was overlooked.

Alby’s name lives on amid the names of the thousands of service men and women on the Australian War Memorial in Canberra - Sapper Albert Henry Paterson, Service Number 7430.

The Age newspaper of June 03 (p7) 1897 reported that a permit was granted to A. Paterson (Carlton) to transfer to Montague.

1894 May 12
Patterson named in 25 man squad to play Port Melbourne at the M.C.G.
No details if he was selected to play.

1894 May 19
Patterson played against Williamstown at Williamstown.
If this was his debut for the Carlton F. C. he would have been 19 years, 76 days.

1894 (Alby or Bill Patterson ?)
In a Carlton side that was weak all round, was one of their best players.

1896 One of the remaining players who formed a nucleus of a strong combination.
(The Carlton Story, H.Buggy and H. Bell, p74,77)