Early on in Season 1993, two kicks of Stephen Kernahan late in consecutive games against Essendon and Hawthorn will live on in the memory of fans. 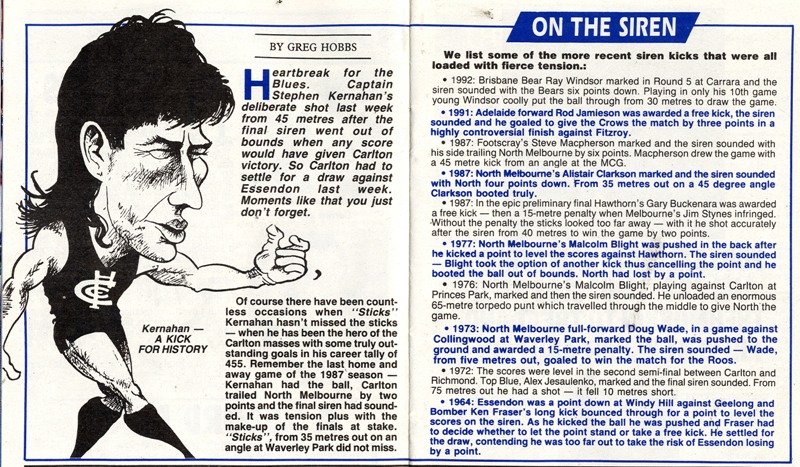 In Round 2, Kernahan would have the ball 40 metres out from goal for a set shot on angle against Essendon with scores tied. What would have been the highest draw in AFL history was made so as a Kernahan floater came off the boot and smashed into the behind post.

But Kernahan wouldn't have to wait long for redemption. In Round 3 versus the Hawks, Carlton staged a strong second half comeback to get close to Hawthorn. Welsh goaled to get us in with a shot, then Sticks marked near the 50, pretty much straight in front, with the pressure was on after the previous week. He literally didn't waste any time, turned around and hurried back from the mark, ran in straight away and kicked the goal. It was almost like he deliberately not giving himself a chance to think of the previous week. He had drilled a beauty.

When the players came up to slap him on the back after kicking the goal he waved them away and told them to concentrate. Champion stuff.

The crowd went mental; people were high-fiving and hugging each other even though they had never met before, it was a fantastic feeling being there!!!

The worst part was how nervous everyone was for the last 2 minutes, while we were trying to waste time, as the Hawks had had our measure for most of the game that day. We held them off though, and Sticks was instantly back to being the legend he was.