View Articles
(3515 bytes)
The oldest known version of the club’s famous theme song, for 85 years buried within the pages of a former Carlton player’s scrapbook of the mid-1930s, has surfaced after eight decades.

The lyrics to the reworked music hall ditty Lily Of Laguna, typed onto a piece of carbon copy paper, are amongst the many and varied clippings contained within an old Rabbit and Hares inventory - which doubled as the scrapbook of Alby De Luca, a 32-game player for the old dark Navy Blues through 1934 and ’35.

Alby’s granddaughter Sue Hiam graciously loaned the scrapbook to the historic football club website The Blueseum, which in turn forwarded digitised copies of the scrapbook’s pages for inclusion in Carlton’s ever-expanding archive. 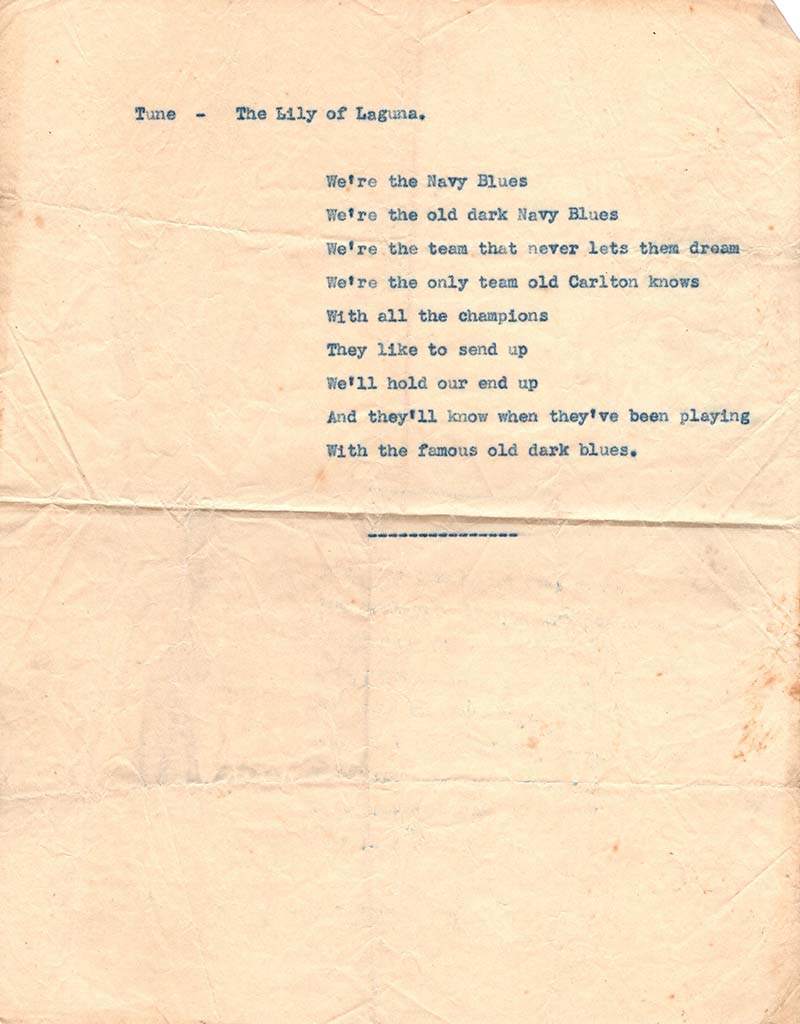 Significantly, De Luca’s version of the theme song tallies with this author’s theory - first expounded in the book Out Of The Blue in 2009 - that the reworked lyrics were originally penned in the early 1930s by Irene McEldrew and her cousin Agnes Wright – a niece of the then Carlton coach Dan Minogue.

According to Agnes’ half-sister Dorothy O’Riordan, the lyrics were put together by the two ladies in the kitchen of a double-fronted weatherboard at No.17 Liddiard Street Hawthorn – which doubled as a boarding house for Carlton footballers of the day Eric Huxtable, Jack Green and Harry ‘Soapy’ Vallence.

“One night, the players returned from training bemoaning the fact that the team had no theme song – so Agnes and Irene sat down at the kitchen table and wrote the song to the tune of Lily of Laguna, which was a tune they liked,” Dorothy revealed in the 2009 interview.

“I don’t believe they (Agnes and Irene) ever got any acknowledgment for writing the words to the song, but I think it still stands up.”

Also of note, with regard to the “us” versus “up” controversy associated with the song, is that the De Luca version carries the “up” and “up” rhyme.

Born in Wollongong in November 1908, Albert Edward De Luca first chased the leather for VFA club Sandringham (for whom he booted the club’s first goal in competition) and later Prahran, before attracting Carlton’s interest. In 1936, following his time at Princes Park, De Luca managed a further nine senior appearances for Hawthorn. Notwithstanding the theme song lyrics, De Luca’s scrapbook contains a treasure trove of rare newspaper articles and photographs, amongst them a Charles Boyles image of Carlton’s 1935 team and another of the man himself, proudly decked out in his playing gear in front of the Ald. Gardiner Stand. Also included on club letterhead, dated March 11, 1935, is Secretary Newtown Chandler’s invitation to Alby to resume training with the club on the 19th . . . “and kindly bring your Football kit”.

Alby De Luca’s scrapbook, in its entirety, can be browsed at http://www.blueseum.org/gallery1650. The Carlton Football Club and The Blueseum would welcome anyone in possession of a pre-World War II player’s scrapbook to consider lending the item to the club (and/or The Blueseum) so that it can be digitised for posterity.