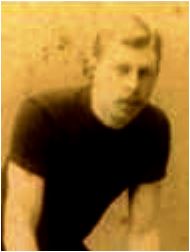 William Leslie Park
A defender (half back flank) recruited from Edlington. (There is an Edlington Street in Hawthorn)
William attended Hawthorn Grammar School and was awarded second prize in Form V1 (year 12) for 1889.
(Argus December 17 p5)
Took up cycling to become the Amateur 10 Mile Champion of Australia circa 1897.


There is some confusion over the first name/s of Park. William Leslie or Percy "Jim" Park?
Mark Pennings' Origins of Australian Football Vol 4 has a Percy Tasman "Jim". Park from Edlington listed 1893 - 1895.
The Sportsman, June 20 1893 also refers to J. Park after his debut game against Williamstown.
The Argus January 02 1893 (p3) mentions Percy Tasman Park of Hawthorn Grammar School in a list of Victorian students who Matriculated in November 1892. This year (1893) Percy was at Melbourne University doing Roman Law, Law of Property, Law of Obligation, as a part of an Arts Degree.
Percy Tasman Park was a solictor to the Mildura Shire, his funeral took place on June 15 1919.
The Mildura Cultivator June 18 (p8) mentions one of the chief mourners was W. L. Park of Ouyen!
The Mildura Cultivator June 18 (p9) 1919 says of Percy, "He played football with such leading clubs as St.Kilda and Essendon and cricket with East Melbourne. He was also a fine cyclist, boxer, rower, gunshot and tennis player."
The newspaper also says William and Percy were brothers and that Percy at his time of death was about 42 years old. That would put his birth as around 1877 and he would have been approximately 16 years old in 1893.
There is no other player named Park playing VFA senior football in Melbourne during this era. However, he could have been in the Second Twenty.
Which one played for the Blues? 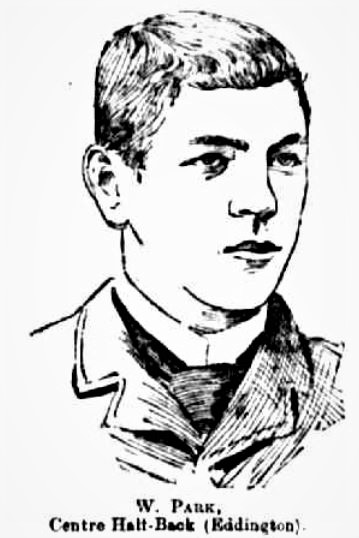 1893 June 09 Friday
The Herald (p3) reported;
"In the Eddington and Carlton Juniors both teams showed considerable improvement on previous performances, W. Park, of the first mentioned club displaying his usual excellent form which entitles him to be sought after by Carlton seniors for Saturday week against Williamstown." (an image of Park also appeared in the article and is shown above)

1893 June 17
William Park debuted for Carlton in the match against Williamstown on the Williamstown ground.
The Blues won.
A report of the game said that he was "up to senior form". (The Argus)
"Park, a junior from the Edlington club, occupied a responsible post half back, where he marked, dodged, and kicked in a style that augured well for his future career amongst senior players:"
(Australasian June 24 p19)

1893 June 20
"J. Park, from the Edlington F. C., Carlton's new back man, played a grand defensive game, but was unfortunate in getting a kick in the groin."
(Sportsman p6)

1893 September 02
Park named in squad to play Fitzroy at the Fitzroy C. G.

1893 September 16
Park played against Melbourne at the Warehouseman's Ground.

1893 September 23
Park named in squad to play Geelong at Geelong.

1898
"W. L. Park, the latest convert to the ranks of cash riders,was formerly the most brilliant amateur rider in Australasia. Until this season Park had an almost unbeated record, but has latterly put on flesh and lost some of his old dash.
All his successes among amateurs were secured on a colonial built machine, but on joining the professionals he has decided to ride a Swift."
(Trove; Barrier Miner (NSW) December 23 p4)

1900
" W. L. Park, the ex-amateur champion who raced with little success amongst the professionals, has decided to return to his first love, and will after the 31st of March be reinstated as an amateur."
(Trove; Eastern Districts Chronicle (WA) February 24 p3)

Carlton historian Tony De Bolfo was contacted by a family member who sent Tony some details and a photograph.
Tony put together the following article on William Park.
www.carltonfc.com.au/news/2011-11-10/blues-twowheeled-hero