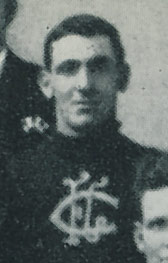 South Australian-born William (Billy) Dunn – better known by his nickname of ‘Mickey’ Dunn – started his career at Carlton during the dire days of World War 1. At first a wingman, he later played as a defender and occasional full-back.

At just 18 years of age, Dunn came to the Blues from St Georges CYMS in Adelaide, and made his senior debut for Carlton in May 1916, against Fitzroy at Princes Park. With Mick and another first-gamer in George White on the wings, and champion Rod McGregor in the centre, Carlton beat the Maroons by four points in a promising start to Dunn’s career.

However, in June of that year, another Blues’ champion – star rover Alex ‘Bongo’ Lang – completed five years’ suspension and immediately returned to the Blues’ senior team. Dunn was squeezed out of the side, and couldn’t get back in until the first match of 1917, by which time the flood of footballers taking leave from their clubs to volunteer for military service had created many opportunities.

Consequently, Mick didn’t miss a match in 1917, when he played a variety of roles; across the centre, at half-forward or roving. He kicked all four of his career goals that year, which ended with a narrow Semi-Final loss to Fitzroy in a torrid, spiteful match. A year later, with the end of the war looming at last, there was more disappointment for Dunn and his team-mates when South Melbourne (the eventual premiers) beat the Blues by just five points in another cliff-hanger Semi-Final.

In 1919, the football season kicked off in an atmosphere of optimism and anticipation, following five long years of the bloodiest war in history. Melbourne rejoined the VFL to end a three year absence, and all teams welcomed back quality players. Mick Dunn couldn’t break into the Carlton side until Round 5, when coach Viv Valentine named him at full-back against Melbourne. The Blues promptly thrashed the Fuchsias by 89 points and from then on, Dunn was played in defence.

Apparently, Mick wasn’t pleased with his new assignment, but was told that there weren’t any other options. He was stationed at full-back again in Carlton’s 26 point defeat by Richmond at Princes Park on June 28, 1919, then told the club that he would not be going on. He was just 21 when his career ended, after 35 matches in our number 21 guernsey.