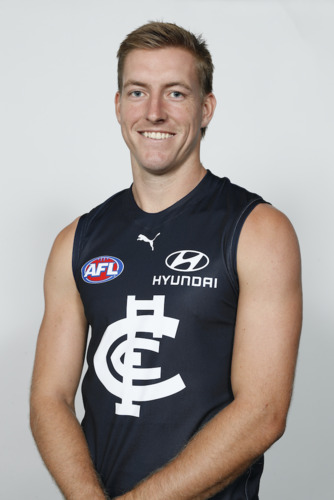 
Will Setterfield joined Carlton from Greater Western Sydney during the 2018 Trade Period. The Club secured the talented youngster along with the Giants' pick No.71 in exchange for the Blues' pick No. 43 and a future second-round selection on the fifth day of the trade period. The highly touted Will Setterfield has made his way from GWS to pull on the navy blue in 2019, with the 20-year-old set to bolster the Blues' emerging midfield. After joining the Giant’s academy at age 13, Setterfield was taken at pick No.5 by GWS in the 2016 draft. The 20-year-old provides a long-term option for Carlton’s developing outfit. Despite having only two career games under his belt due to an unfortunate run with injuries, Setterfield has shown promise, averaging 25 disposals, 4.7 clearances and 7.6 tackles across seven NEAFL games in 2017. After rupturing an anterior cruciate ligament during a practice match against the Swans this year, the GWS academy recruit - who bases his game on Western Bulldogs star Marcus Bontempelli - will be keen to get back to playing senior footy in 2019. Despite injuries limiting Setterfield to just two AFL games, the former Giant has already provided glimpses of what he's capable of at senior level. He amassed 12 disposals, three marks, six tackles and four contested possessions in his AFL debut against the Tigers, following up the effort with a classy performance against the Dockers the following week.

Silvagni: Future is Sett with Will
ALL involved at Carlton were “rapt” to add emerging young gun Will Setterfield to the Blues, according to Stephen Silvagni. The Blues acquired the talented 20-year-old midfielder earlier today, sending pick No.43 and a future second-round draft pick to Greater Western Sydney for Setterfield and pick No.71. Setterfield adds to Carlton’s burgeoning young midfield stocks, alongside joint captain Patrick Cripps, Paddy Dow, Zac Fisher and Sam Petrevski-Seton. Speaking to NAB AFL Trade Radio, Silvagni said it was important the deal was equal for all parties. “If you calculate those points, it probably equates to around pick 15 — early days, that’s what the Giants were looking for. I think it was fair,” Silvagni said. “We’ve given up a few selections for him and we’re thrilled to have him on board. We’ve tried to target midfielders this trade period.” Carlton has evidently been fans of Setterfield since the beginning, bidding on the youngster with pick No.5 back in the 2016 national draft. Silvagni said Setterfield’s versatility and ability to add another dimension to Carlton’s midfield were exciting propositions. “He’s a tall inside mid, he’s a hybrid that can play inside or outside, he runs really well, has really good hands and can kick a goal,” Silvagni said. “We certainly do rate him, ever since his 18th year.” The 2018 season was written off for Setterfield after rupturing his ACL in a practice match back in February. However, Silvagni said all parties were confident that the injury troubles were behind him and a long Carlton career was in the offing. “We’ve done a medical on him and he’ll be in full training after Christmas. It gives him plenty of time to get ready for Round 1, so we’re hoping his form warrants selection,” Silvagni said. “When you’re overcoming a knee injury, your upper body does build up and can help a little bit physically.” Silvagni said that while “you never know” with five days left in trade period, the Club was happy so far with its work this off-season. “To be able to bring in Mitch McGovern, Will and Alex Fasolo through the door, we think we’ve done reasonably well,” Silvagni said. “There’s some conversations about the first pick and it’s not off the table, but what a deal would look like — I’m unsure. “To hold onto pick No.1 … We think we’re going to get a really good player there. We’re in a pretty good position.” - Cristian Filippo, Carlton Media.

At the conclusion of the 2022 season, Carlton facilitated a trade to Essendon for a future fourth-round selection in exchange for out-of-contract midfielder Will Setterfield and pick No.68. Setterfield played 55 games in his four seasons since arriving at the Club from GWS at the end of 2018. “As we’d mentioned at the start of Trade Period we would have liked to retain Will, however the terms he has been offered at Essendon are significantly greater than any offer we were prepared to present,” Carlton Head of List Management Nick Austin said. “With Will coming out of contract, and given his limited opportunity due to our depth in the midfield this year, Will had every right to explore his options and we are satisfied to facilitate a trade that provides us with an additional pick for next year and therefore some flexibility. “Will leaves with the respect of everyone at our club for the contribution he made and friendships he built here.”