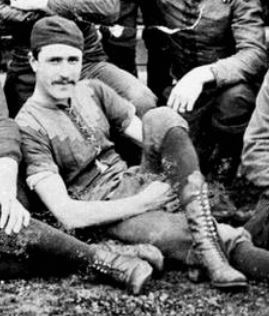 1876 A neat and active little forward, a pretty drop, but should do more of it, did not play in many matches through an accident.
(The Footballer. 1876. p34)

1877 Gave promise of becoming a brilliant forward, judging and marking beautifully, and improving in kicking, business engagements necessitated an early retirement for the season.
(The Footballer. 1877 p35)

One of the leading players for 1877.
(Centenary Souvenir of Carlton Football Club p13)

1878: Signature from a petition to the Melbourne City Council to provide a football ground for Carlton.
W. Bracken
Thus on 22 September 1877, when the senior club Barwon, played Carlton at the riverside ground at Geelong, an excited crowd of 4000 saw W. Bracken of Carlton make 'a splendid mark high about his opponent heads, fifteen yards in front"
Unfortunately he was not allowed to kick and thereby level the score because Barwon backman complained of an infringement.

Bracken, described as a "neat and active little forward, and pretty little drop" became brilliant in judging and marking the ball.

But high marking was still considered dangerous, especially as the surface of the main arenas was not level and was often too hard for a player who,trying to mark high above the ground,fell awkwardly from a height.
(A Game Of Our Own. Geoffrey Blainey p69)

1878 May 18
"W. H. Bracken from the Carlton Club also played for the Norwoods, but he was not in good form, having just arrived from the steamer."
(Adelaide Observer, May 25, p3)

W. Bracken was as a premiership player of South Australian club Norwood. He played with Norwood up until the end of the 1880 season.
Norwood won 10 premierships between 1878 - 1889.

1879 August 8
"Messrs. Healy Bros., of Hindley-street, have presented a very elegant pair of football boots to Mr. W. Bracken, of the Norwood Club, as a prize for having kicked a goal against the Geelong Football Club in the recent match, Norwoods vs Geelongs." (S. A. Advertiser, p5)
(Maybe the same pair of boots he is wearing in the above photo?)

1881 May 7
The South Australian Register reports that Norwood's Bracken, "who was very useful as a goalsneak, though he could so seldom kick straight" is now in Melbourne.