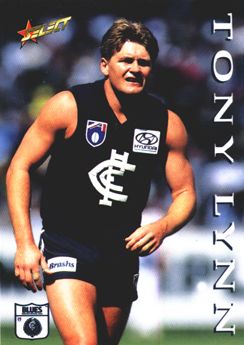 
Tony Lynn was a right foot, back pocket player with a distinctive bowl style haircut, who played for the Blues between 1994 and 1996. Originally from Queensland (Morningside), but drafted from Central Districts in South Australia, Lynn was most probably picked up by the Blues after a fantastic game for the Allies where he had the ball on a string. He played his first game for Carlton just before he turned 26 years of age.

Lynn would play 27 games for the Blues, including 20 in 1994. A nuggety looking player, on occasion Lynn could roost a 50 metre goal and seemed to revel in running forward despite predominantly being played back. He kicked 14 goals overall.

Lynn turned up for the Brisbane Bears for a Season in 1988, in his time with the Bears he played six games and booted five goals.

He finished his career back in Queensland, rejoining Morningside in 1997 but ending up at Mount Gravatt. In Mt Gravatt's 2002 Grand Final win over Southport, Lynn won the Joe Grant Medal as 'best on field' and announced his retirement. Lynn now coaches at Coorparoo AFL club.