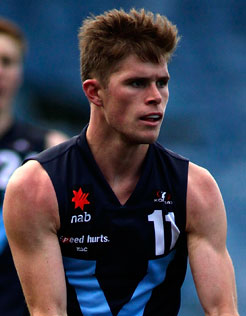 
Carlton chose 18 year-old Tom Temay as the Blues second selection in the 2012 National Draft, at pick No. 35. A right-footed medium-sized defender from the Sandringham Dragons, Tom was the son of Paul Temay, who had played 52 games with St Kilda from 1980 to ’86, and coached his son through the junior ranks at inner-suburban club Prahran.

Prior to joining the Dragons, Temay was also a promising middle-distance runner. He finished third in the 2009 Pan Pacific 3000 metre Championships in Canberra, and then had to make the big choice of which sport to pursue; athletics or football. “I think football was always going to win,” Paul Temay told the media on draft day. “He chose football because he just loves the team involvement, and he’s been carrying a footy around since he was about four.” Pre-draft discussions rated Tom’s foot-skills, awareness and endurance as outstanding, although there were concerns about his relatively slight frame. Therefore, he spent 2013 as a development year, working hard in the gym and playing 14 games with the Northern Blues.

After another intensive pre-season in 2014, Temay became a consistent contributor at VFL level without earning a promotion to Carlton's senior team. In September - when the Blues began their annual cull of the club's roster - he was he was one of four players delisted.

In 2015 Temay went back to full time study at RMIT and enrolled in a 4 year degree in Property and Valuations.