Thomas D. "Dodger" O'Connor.
He also played with North Melbourne, South Melbourne and Port Melbourne, passed away at his residence 421 Dorcas Street.
Aged 68, he worked at the Victorian Stevedoring Company.
Buried at the Melbourne General Cemetery.

"Dodger" O'Connor was named in all Carlton team squads for 1889, it is quite possible that he played in all matches.
However his name does not appear in the match reports until May 11 and he is then named in many of the matches after that date.

T. O'Connor was recruited from Tasmania in 1889. He made such an impression that he was selected in the Victorian team that ironically played Tasmania on the M.C.G. on May 18.
O'Connor was named as one of the Vics' better players after best on the ground, Jack Worrall.


1889 April 13
O'Connor is named in the 23 man Carlton squad that played a pre season game against Britannia at Princes Oval.

April 23 Tuesday
First round of the season.
Carlton played North Melbourne at the M.C.G.
O'Connor was named in the 22 man Carlton team squad.

1889 May 11
O'Connor was mentioned in the match report against Melbourne at the M.C.G.

1889 September 07
"From a letter shown me by one of our leading sports from a friend from a friend of his in Melbourne, who at one time, was a resident of Launceston, the following clipping will prove interesting to a number of readers: - 'The Carlton, as an unprejudiced onlooker, I say they have played with worse luck than any team in the field this season. For old acquaintance sake I keep my eye on "Dodger" O'Connor, and be the powers me ocular always view him in the midst of the fray. The public all like "Dodger," as they do all fair manly players and the air resounds with, "Go in Dodger," as it used at the Launceston Cricket Ground."
(The Colonist (Launceston Tas) p6)

1889 Very worthily represented the Navy Blues in the ruck during the year.
(The Carlton Story. H.Buggy and H,Bell p65)

1890 The Carlton Gazette says Dodger O'Connor is going to Port Melbourne this season.

1899 T. 'Dodger' O'Connor was vice-captain of South Launceston in it's first season in 1899. The report said ex South Melbourne. 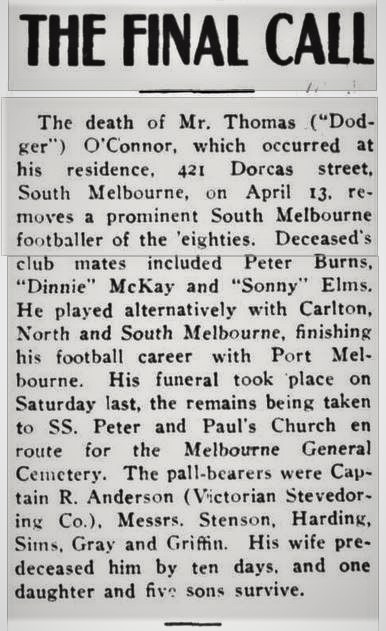