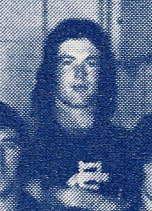 Terence 'Terry' Herbert Kernan was recruited from Assumption College, he played U/19's and reserve grade football from 1971 to 1974 for the Blues. In 1972 he was captain of the U/19's and won the Most Consistent award for the U/19's as well. He played most of his football on the half forward flank. At the start of 1974 South Melbourne tried to get a clearance for him but Carlton would not let him go.

Official Coaches’ Partner: Carlton Football Club
In March 2016, Ontime Delivery Solutions signed on as Carlton Football Club’s Official Coaches’ Partner for the 2016 and 2017 AFL seasons. Ontime Delivery Solutions' Director Terry Kernan is no stranger to Carlton - he was captain of their Under 19s in the 1970s and also played in the Reserves - and we’re delighted to assist Carlton in building on the foundations set by Brendon Bolton and his coaching panel. “Ontime Delivery Solutions' business is about transporting and delivering successfully every day and we wish the coaching group, and the team, every success for the 2016 and 2017 season,” said Terry