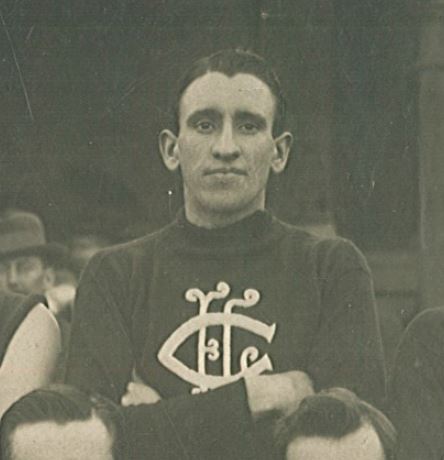 A tall, versatile player from Launceston, Tasmania, Stan McKenzie spent just one season with Carlton Football Club in our Premiership year of 1914. He played 14 consecutive matches for the Blues, before losing his place in the team on the eve of that years’ Grand Final. Twelve months later, he died of illness while on active service with the AIF in Egypt.

Born Matthew Stanley McKenzie in Launceston in 1890, Stan was educated at the prestigious Scotch College, where he was regarded as an average student and an outstanding sportsman. He represented both his school and his state in football, athletics and cricket. After graduating, he began a career in banking, while continuing to play football in the winter and cricket in the summer.

He was outstanding in the centre, or as a follower in the Launceston Blues’ 1909 and 1913 NTFA Premiership teams, and also represented Tasmania in the 1911 Carnival in Adelaide. In the summer of 1912-13, he completed a unique double when he scored an impressive 59 runs for the Tasmanian cricket team in a match against the touring English Test squad in Launceston.

Stan’s credentials attracted many of the VFL teams to his door, but it was his former Launceston team-mate, George Challis, who eventually convinced him to join the Old Dark Navy Blues in 1914. McDonald was given the number 27 guernsey for his debut match against Geelong at Corio Oval in June. Named in a forward pocket, Stan joined a daunting attack that included Vin Gardiner at full-forward, George Topping in the other pocket and Challis at half-forward. Geelong weren’t ready to be intimidated however, and downed the Blues by 31 points in a high standard match.

Meanwhile, political tensions in Europe were threatening to plunge the region into armed conflict. A strident, ambitious Germany was rattling the economic and political cage erected around it by Great Britain and France, and all three nations were spoiling for a fight. The flashpoint came in August, 1914, when Germany invaded Belgium and World War 1 began.

Back in Melbourne, as the call to arms in defence of the Empire echoed across the country, Carlton recovered from some early setbacks to finish minor premiers over South Melbourne, Fitzroy and Geelong. Then the Blues leapt to favouritism for the Premiership with an emphatic 20 point victory over Fitzroy in one Semi Final. All that was then required was for the Blues to beat South Melbourne in the Final.

Alas, that didn’t happen. Showers swept across the MCG all match, and the Bloods adapted better to the conditions to beat Carlton by 19 points in a scrappy affair. Had South Melbourne finished as minor premiers, the 1914 Premiership would have been headed to the Lake Oval. But The Blues exercised their right under the VFL rules of the day, and challenged South Melbourne to a Grand Final rematch.

Stan McKenzie had been hardly sighted in the Preliminary Final, although he did manage one of Carlton’s three goals from a half-forward flank. On the Thursday night prior to the Grand Final, Stan and winger Frank Triplett paid the price of that defeat, and were left out of the team. Alf Baud and George Calwell were named in their place, and Carlton turned the tables in a thriller to win our fourth flag by six points.

Soon after that bitter-sweet game, Stan enlisted in the First AIF as a medical orderly. He spent some months tending to Australian casualties on the Gallipoli Peninsula, (where he was promoted to the rank of Sergeant) and late in 1915 was posted to the 2/2nd Clearing Hospital at Alexandria, Egypt.

While serving there, he suffered a severe attack of appendicitis and, although the best possible medical facilities were on hand, Stan died on December 8, 1915.